Sun on My Back


First all the talk was about Energy Star. Then the concept of the Passive House came into vogue. Now home builders have honed in on the idea of net-zero-energy homes. It’s the latest rage in the world of energy-efficiency construction. The idea is to improve a home’s energy efficiency to the point where a reasonably sized photovoltaic (solar) system can generate as much energy as the home uses.


It sounds new and modern but the idea of using the sun to heat or cool our homes has been around for a very long time. Capturing the sun for power wasn’t a new concept here or in other parts of the country. In fact, the whole industry got off rather inauspiciously in 1933 at the Chicago World’s fair. It started with a tiny architectural firm called Keck and Keck and the first glass house built for Chicago’s World Exposition.

George Keck designed two key model structures for the ‘Century of Progress’ exhibition in Chicago; dubbed the ‘House of Tomorrow.’ Keck became a pioneering designer of passive solar houses in the 1930s and 1940s after realizing that the all-glass ‘House of Tomorrow’ was warm inside on sunny winter days without use of the furnace. His model homes and accompanying publicity efforts contributed greatly to the significant ‘solar house’ movement of the 1940s.

But capturing the sun’s warmth was one thing, controlling it was something else. Keck continued his research with south-facing windows and experimented with various calculations to find the idea length for overhangs. South facing windows with the proper overhang could maximize the sun’s efficiency during the winter months and yet limit it during the summer months.

Solar research and improved construction techniques helped move the energy-efficiency philosophy along among architects and home builders. Working in tandem, the focus was on cooling homes with less use of energy as well capturing the sun’s power to heat them. It was only later that a new focus switched from deflecting sunlight to harnessing it for the creation of electrical current and kilowatt capture.

Research continued and the solar movement came and went in regular intervals of interest, progress, stagnation and then renewed interest all over again. One of the final breakthroughs that finally pushed the American mindset to more energy-efficiency was the oil embargo of 1973. It wasn’t just the long gas lines at the pump or Jimmy Carter telling all of us to turn down the thermostat, it was a fear that others (outside of this country) controlled our way of life and means of transportation.

The message finally came home that we had to become masters of our own destiny if we were to live energy-free and make the best use of our resources on the planet.

Palm Springs was actually slow in getting into the game. You would think that with the amount of sunlight Palm Springs and the entire Coachella Valley enjoys year-round it would be a mecca for solar energy initiatives. It’s hard to argue against solar power when bright warm sunlight blankets the valley 354 days out of the year. Surprisingly that wasn’t the case until just recently. 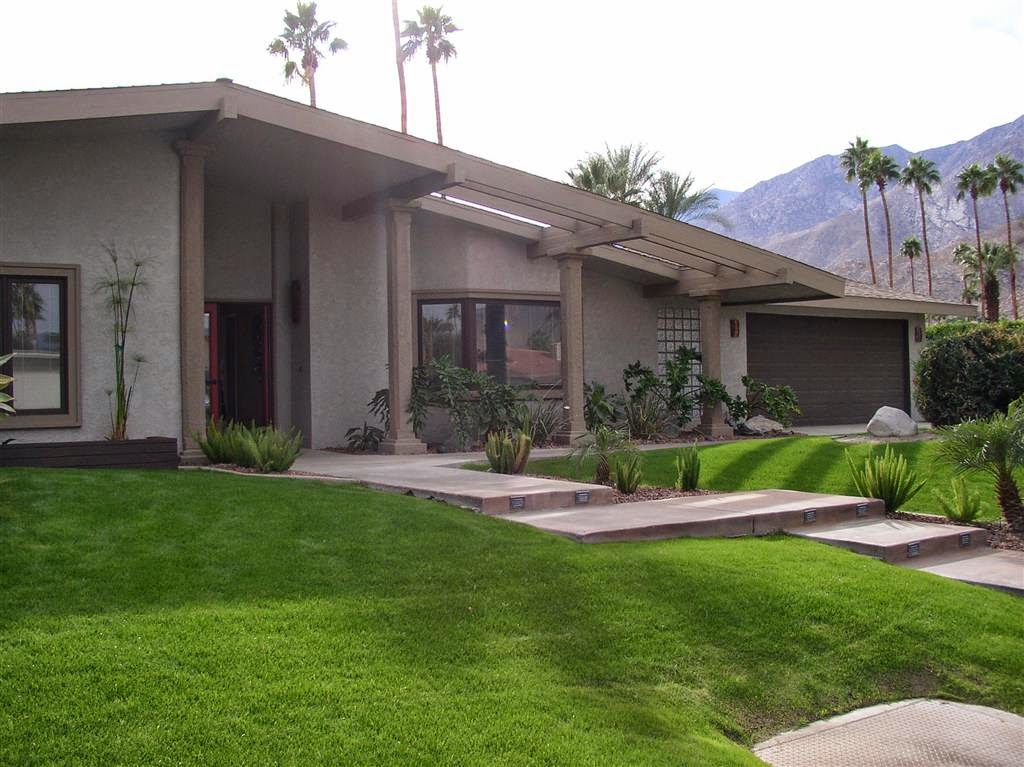 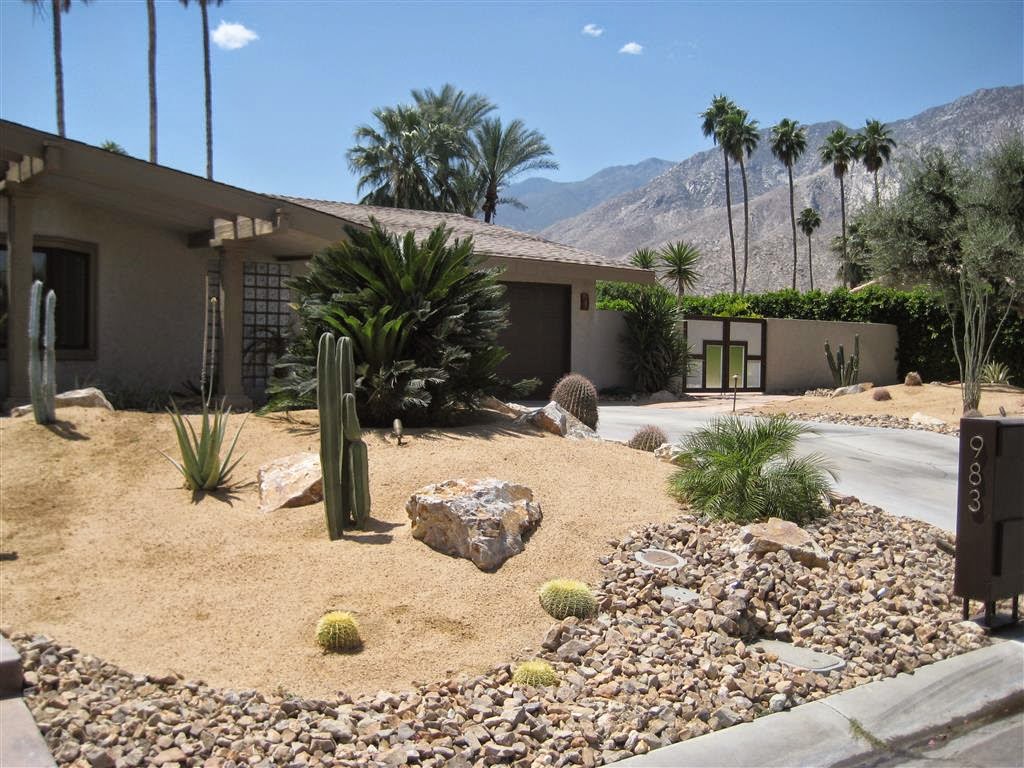 An easier sell for residents of the desert has been the conversion of grass lawns to desert scape. Beautiful lawns make sense in Minnesota but not so much in the desert. Many communities offer refunds and other incentives to make the switch. In our case, with a third of an acre, it was an easy sell to make the conversion. There will be about a ten year payback but the savings were apparent from day one. Our water bill went from an average of $275.00 per month to just under $45.00.

The recession of 2008 hit the valley particularly hard because of its strong dependence on tourism. But even before that, solar companies were having a hard time penetrating the obvious marketplace of Southern California. Arizona and several other neighboring states were making more inroads to capturing sun power than California.

Despite the abundance of sunlight year-round and heightened energy consciousness, there wasn’t much movement until the costs started coming down. Solar panel prices have dropped almost 50% in the last two decades. In addition to the initial cost, energy panels today are much more efficient than just a few years ago.

Those changes helped but the final tipping point seemed to come about when the solar companies changed their business model. In the past, solar panels were packaged and sold as a cluster of glass on the roof which the homeowner owned. It was a long term investment and promised attractive savings over a long period of time. Potential buyers were assured that the value of their homes or businesses would go up with solar on the roof. That pitch often landed on deaf ears when the total cost of solar was explained. The new business model addresses those concerns directly. 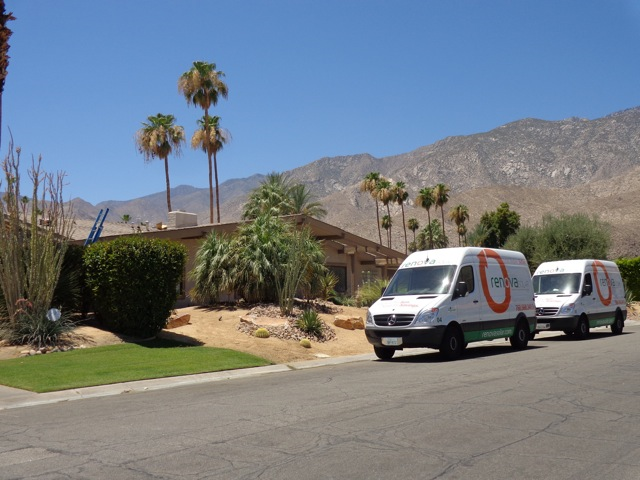 Solar companies are now offering a leasing program in lieu of in an outright purchase. There are no out-of-pocket expenses on a rental program aside from the need to clean the panels at least once a year. It is a twenty year contract that can be passed on to the next home owner but not broken. Much like an additional mortgage on the home. 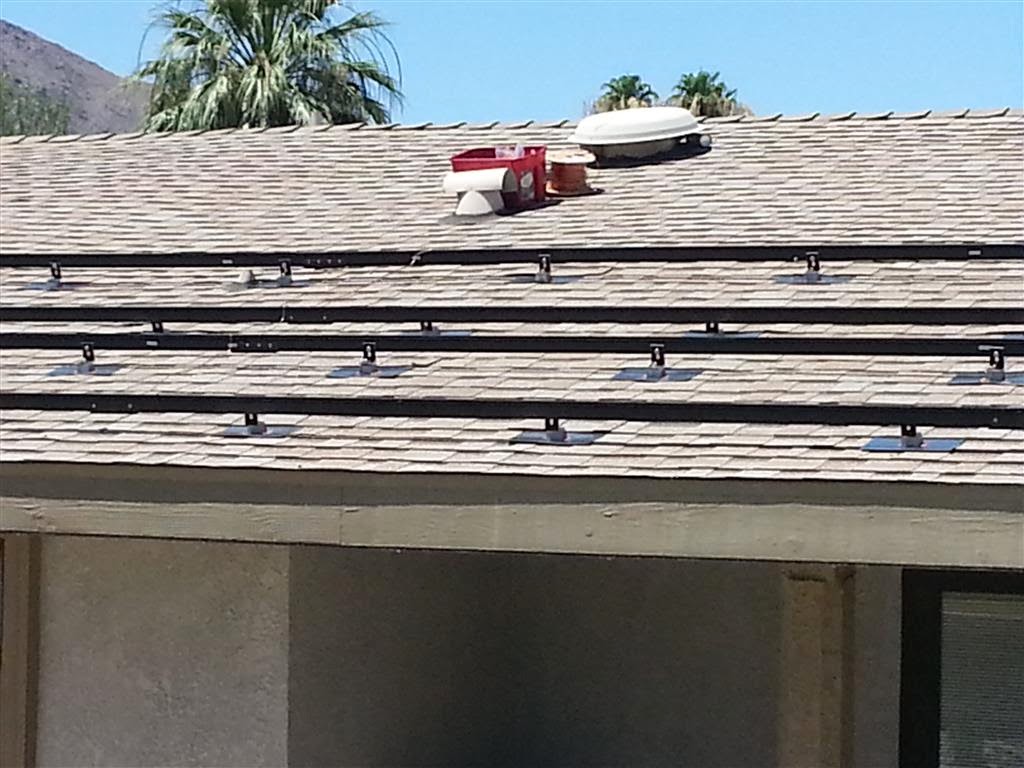 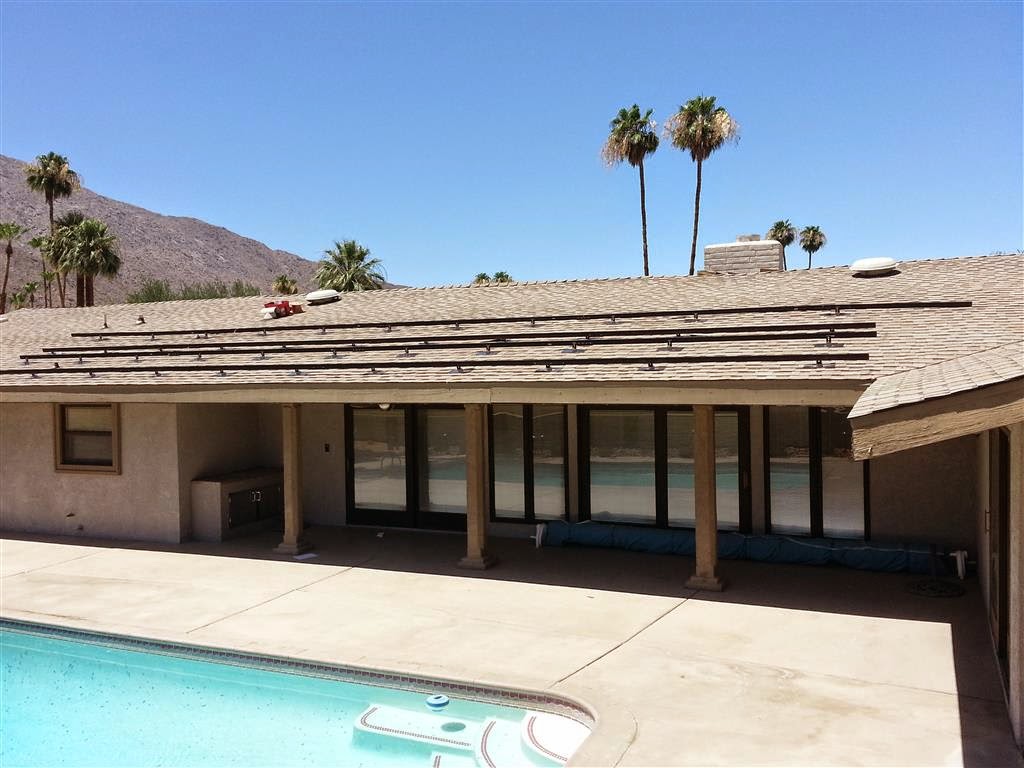 At least in Southern California, there seems to be a sun-powered gold rush going on. Vendors are lining up to offer solar power for every imaginable need. To provide electrical power to homes and businesses, to heat pools, power cars and other vehicles, etc. Many are quite legitimate, others not so much. One key ingredient to their services are the affiliations they have with solar panel manufacturers. 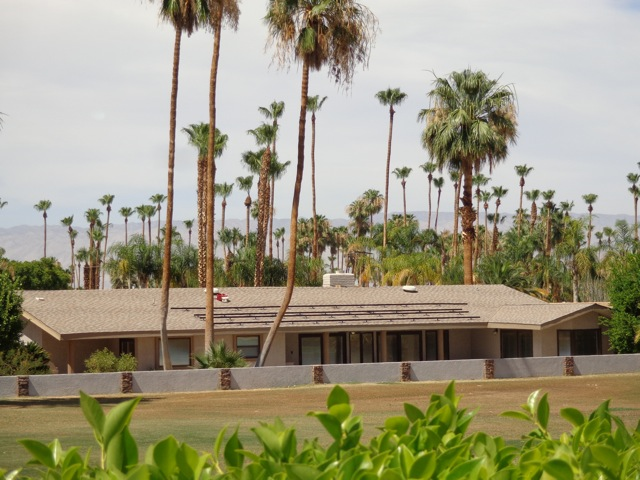 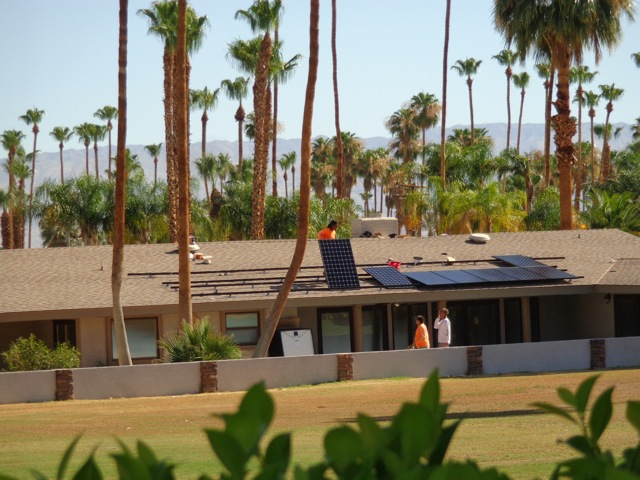 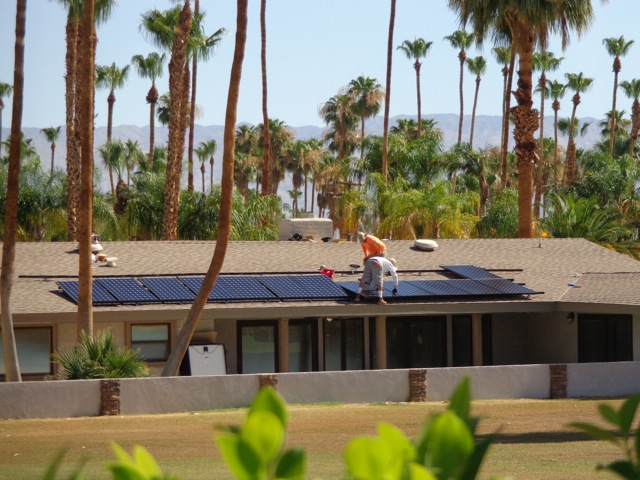 Sun Power is one of the largest and most successful of the solar companies in the U.S. Its vendors offer a variety of services from simple installation to maintenance and other services.

Sun Power like the other solar company guarantees so many kilowatts per month and the homeowner agrees to pay them a set monthly fee for a period of twenty years. We have twenty solar panels on our roof. Based on monthly averages over a twelve month period of time, those panels should deliver more than enough electricity to meet all of our electrical needs for a year. Excess electricity generated by our panels can be purchased back by So. Cal. Edison (at a much reduced rate.) 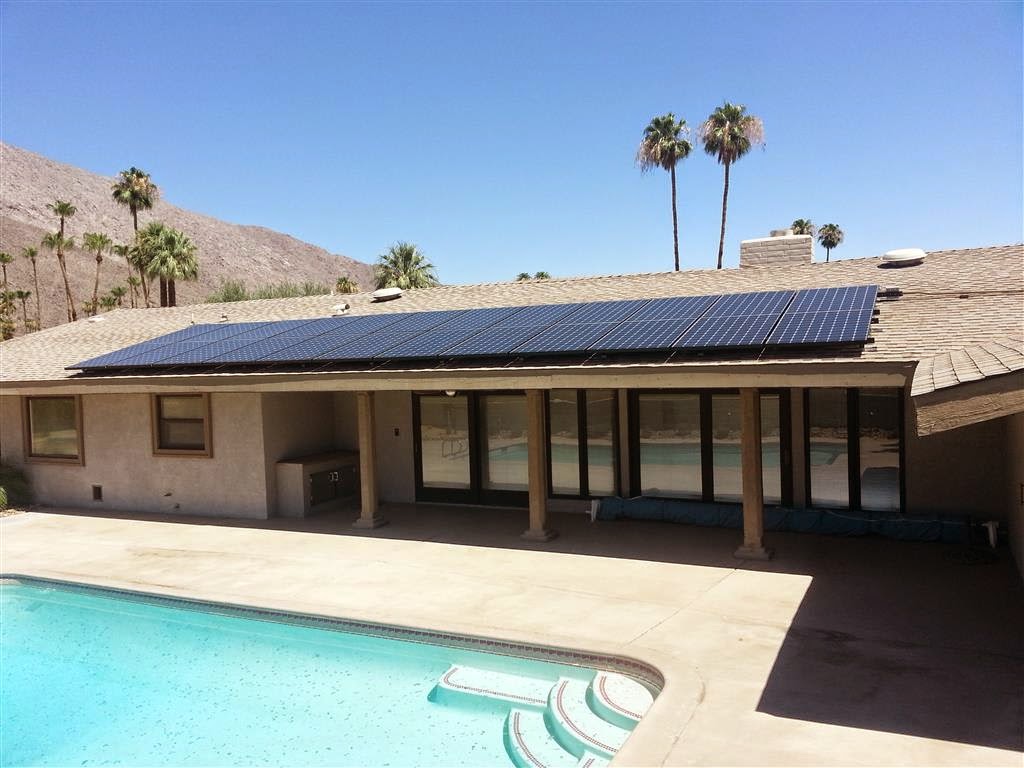 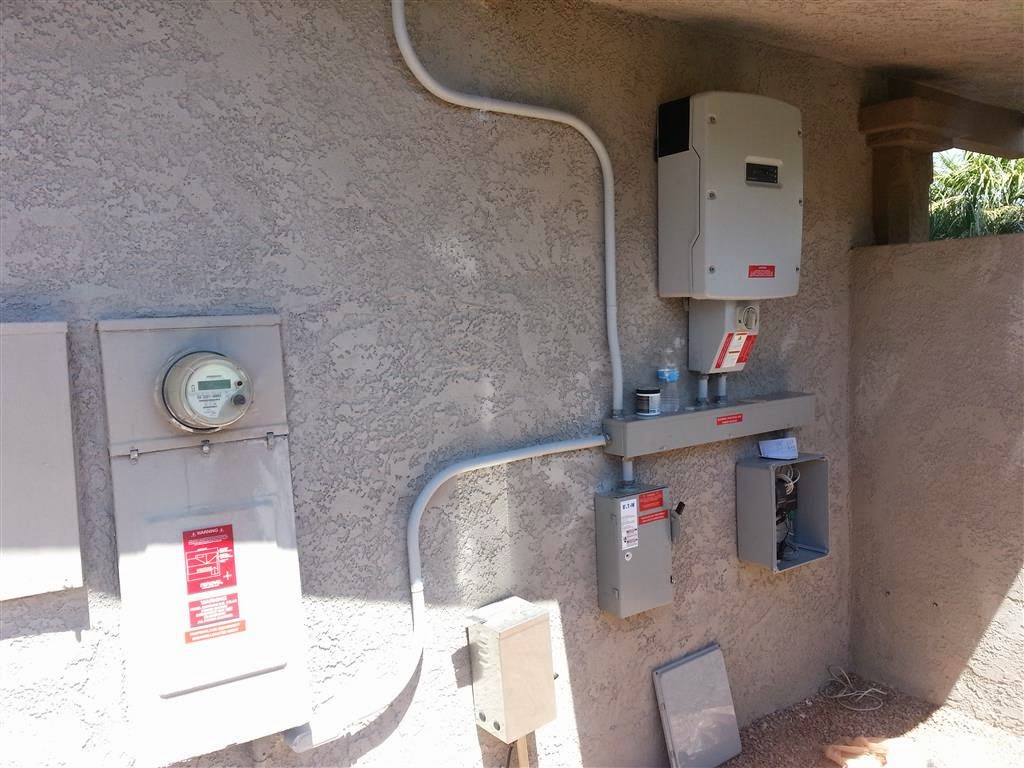 Of course for every push in one direction, there is usually a counter-push in the other direction. Large utilities and the infamous Koch Industries are crying foul. They argue that their profit margins are being squeezed by folks who are off the grid and making their own electricity. Together they want to roll back programs that incentivize the use of renewable energy. Of chief concern to them are programs that help the solar industry such as net metering via solar panels and mandates that require utilities to have a percent of their power coming from renewable energy.

Much like the political pressure being applied in Arizona, these entities are seeking a tariff on solar providers and users to offset their own shrinking margins. In Palm Springs and much of Southern California, the local utility, Southern California Edison, is seeking rate increases to help offset the growth of solar and its effect on their profit margins. 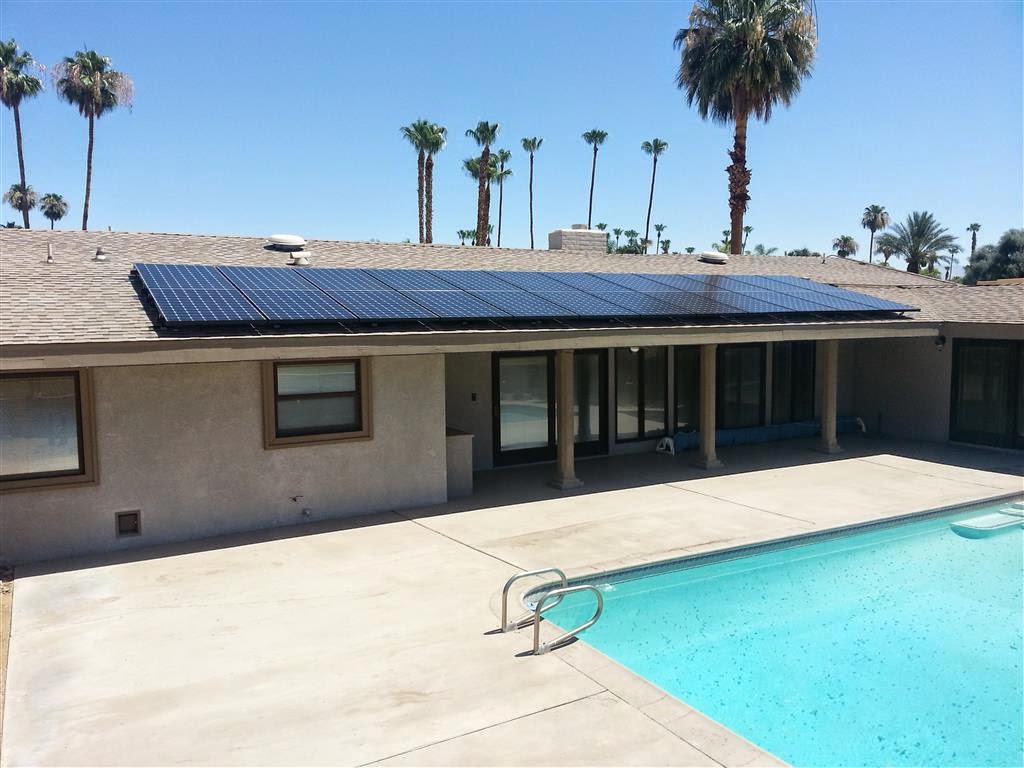 Our own cost savings could be negatively affected if there was a tariff posted against solar owners such as ourselves. It’ll be an interesting debate to follow especially since we’ve aligned ourselves with the sun on our back.

So just as in the past when the interest in solar grew and then waned over time, the issues surrounding energy efficiency and their subsequent cost savings will continue to be an ongoing debate.

The only difference now is the advance of solar technology and increased awareness that we are all stewards of this planet. It’s the only home we’ve got.
Posted by Author Denis J. LaComb at 9:00 AM