I’m told we played a lot together when I was a young pup. She was a bit older than me but very cute and wore a chin-hugging cap probably in style at the time. It wasn’t the best of neighborhoods and we didn’t live in the nicest of houses but it was home and she lived next door.


Of course, I remember absolutely nothing about that period in my life. In fact, if it hadn’t been for an old photo of my grade school that I posted on a Facebook group page I never would have known Judy existed or was my first play date.

Turns out, Judy was only in my life for a very brief period of time…none of it remembered by either my sister or I. Then my mother took us and moved a couple of blocks away. Judy disappeared for another seventy years until one photo rekindled an avalanche of memories…on her part. If it weren’t for a couple of old cracked black and whites, this cyber reunion would have ever taken place.

‘Old Saint Paul’ is an interesting Facebook group page. Every day people post old photos of  buildings, relatives, childhood memories, documents, etc. It’s where people gather to rekindle memories of a time and place long since removed from our collective consciousness. It’s a stroll back in time and for many of us a journey back to our youth and all of those memories stored there.

The reunion between Judy and myself took place innocently enough…and quite by accident. Someone on that aforementioned ‘Old Saint Paul’ Facebook page had commented one day about a downtown school that used to be part of St. Louis Catholic Church years ago. I knew the school well. I went there for eight years. So did my sister. But at the time of the posting I was in Sedona and couldn’t comment or share a photo of my school.  I promptly forgot about the message and went out seeking heights to climb and vortexes to cavort about.

Weeks later a similar Facebook comment came up again and I decided to post the one photo I had of my old grade school. That one posting brought a plethora of responses, over a hundred plus at last count. One of the people responding mentioned the fact that she might have known me and wondered if I once lived on Smith Avenue with my sister and mother. She said her name was Judyth but back then it was Judy.

I scoured a batch of old photos I kept tucked away in an old shoe box. To my great surprise I came across several photos of my sister and me with another young girl. My mother had scratched on the back of those three photos: ‘Marlene, Denis and our neighbor Judy.’ I couldn’t believe that after seventy plus years I had encountered the real Judy in the photographs.

I put those three photos on ‘Old Saint Paul’ and got a plethora of positive reactions.

The house on Smith Avenue was the second place we lived in near downtown Saint Paul. I was all of three-years-old and my sister two. Judy lived next door and was about five or six. She said her mother liked my family and allowed her to play with us. I assume we spent plenty of time across the street at the Smith Avenue playground. 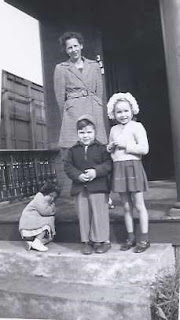 All of that is gone now, replaced by a huge hospital complex, one Burger King and several surviving houses facing reclamation.

I still haven’t met Judy in person and I’m not sure if I ever will. Like two ships passing in the cyber night, we played together for a brief period in our lives then were separated for another lifetime. It was a brief poignant exchange of vapid memories held together by fading photographs.

Out of that flurry of viewer’s comments came one from St. Paul’s own self-described house detective. Jim Savach. Jim wanted to know more about the house where I spent that time. I had no answers for him but I did have an old photo of my parent’s small lunch shop.

Frenchy’s Eats was a small neighborhood diner just a couple of blocks away from our house on Smith Avenue. It was my parent’s first and only entrepreneurial venture and it didn’t go well. Mom claimed that the help always gave some of the food away and Dad drank most of the profits away.

What really happened back in the early 40’s to those two kids standing on that porch as well as that tiny diner is forever lost in the absence of any oral history that could have been passed down from my mother’s generation to ours. It never was.


So if it weren’t for Judy and her keen mind and solid memory I probably never would have known about my first play date or the time I spent in the shadow of Saint Paul’s past on Smith Avenue.
Posted by Author Denis J. LaComb at 4:00 AM