In my never-ending quest to find out ‘whatever happened to’…in Palm Springs, I decided to venture back to my favorite Starbucks for another predawn sojourn. When I was first began visiting this desert hamlet years ago I would usually get my fix there in the early morning hours.

This Starbucks is located in the Warm Sands neighborhood.  A resort playground noted for its popular gay enclaves and a plethora of tourist motels. This particular coffee corral has become a popular mecca for the more adventurous travelers to Palm Springs, colorful sometimes-questionable characters, desperados from the coast as well as local notables.


The crazy people parade starts promptly at 5:30am and continues well into each day.  But it’s the early morning hours that are usually offers the most entertainment. All-night revelers, secret liaisons re-emerging into the daylight and happy hippy couples of every description end up clambering for their morning nitro in front of the sometimes amused, seldom shocked and often heavily tattooed baristas…of both sexes. Actually, that goes for the customers too.

But it was really Saint Joseph who had caught my attention during my early morning explorations years ago.  He was interesting enough that I wrote one of my earlier blogs about him. It was entitled Saint Joseph of Starbucks. 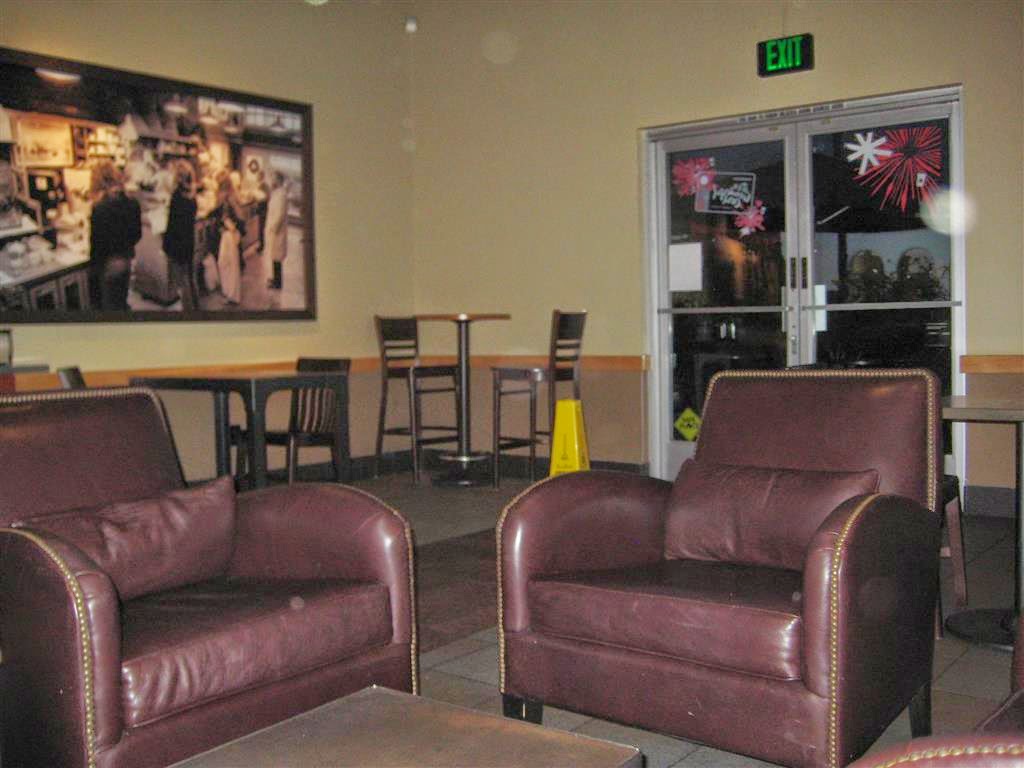 Back then, I used to arrive at the coffee-induced assembly area just after 5:30am.  Yet no matter how early I arrived, St. Joseph was always there ahead of me. Sitting at the same table in the same corner and waiting to council, Saint Joseph was ready to advise and administer to the daily needs of his flock.

The only variable was his daily entourage and a host of visiting dignitaries who shuffled by for their coffee fix yet always found time to stop by his table-office for a brief exchange of wisdom before melting into the night once again.

Joseph is an older gentleman probably in his mid-seventies.  He is always cheerful, ready with a smile and a laugh. He has a pleasant demeanor that never varies with the seasons or time of day. I don’t know if Joseph is married, gay or straight. But that hardly matters especially in a place like Palm Springs.  Joseph is a counselor, advisor, cheerleader, friend, listener, and seeker of the good in everyone he meets.

For many people, Joseph is their early morning elixir for what ails them on that particular day.  Unlike the old men who gather at coffee shops around the world to blather on about nothing in particular and expose their ignorance with Monday morning quarterbacking, second-guessing politicians and berating the government, Joseph is articulate, thoughtful, and intelligent. On this particular morning, I found Saint Joseph in his favorite corner chair surrounded by the usual gang of suspects.  Their conversations still vary by the day. One time it might be the local news sprinkled with criticism of national politics. The next might be the weather; summer is hot, the rest of the year is wonderful. The conversations are open, honest, and usually bent toward the left, which is not surprising considering the community that hosts them.

The cadre of visitors varies each day but some of the old regulars stand out in my mind.

There is the young woman who lives in her wheelchair.  She moves around by using her crutches as walking sticks. She has the sad eyes of a fawn that has just lost her mother. She has many friends at Starbucks and she relishes their company as they relish hers.

Then there is the muscle man, built solid as a rock who walks a tiny white toy poodle.  The dog is his trusted companion and he loves that animal with an affection that is palatable.

A day laborer stops by often.  He always wears a knit hat even in 125-degree summer heat. And he always seems to be moving from one job to another.

There is always the same man in some corner with his flashlight, scanning the pages of the LA Times and NY Times because the damn lighting is so bad inside.

By 7:30, Joseph is gone.  I have absolutely no idea where he goes. It might be to work, back home or another coffee shop. But it doesn’t really matter. Joseph is sure to be back the next day, same place, same time. There will be the same flock of casual friends who look forward to his ready smile, quick wit and easy to swallow dose of friendship. For many folks, that’s all that’s needed to face another day and their reality, if only for a moment in time. 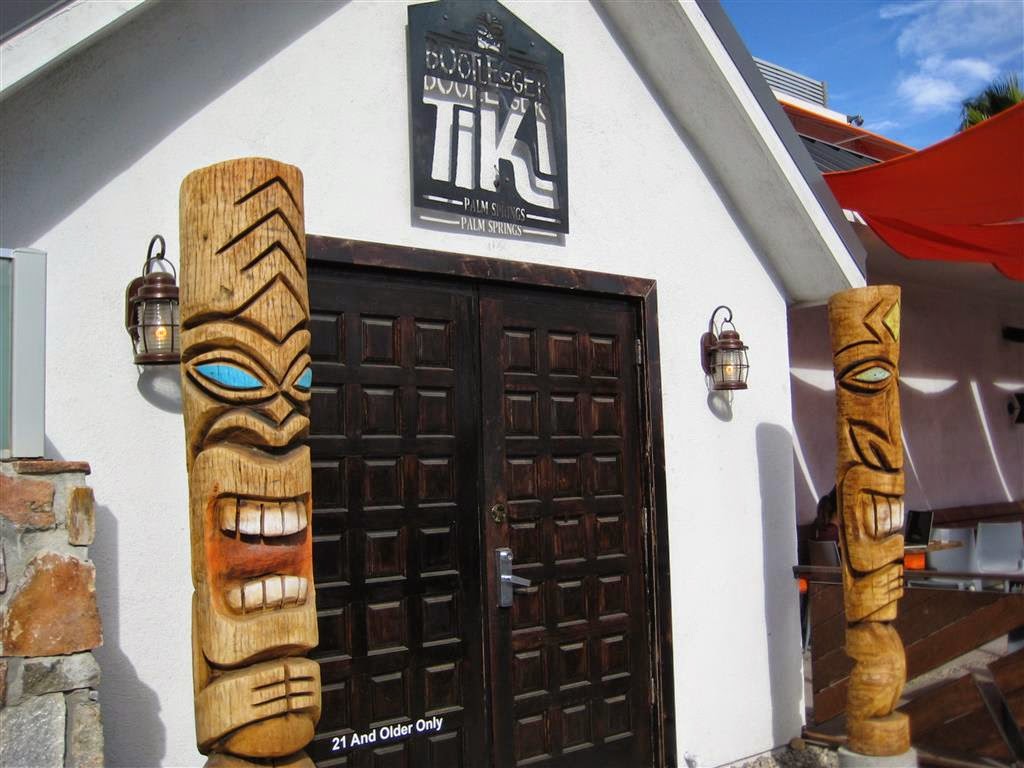 Further up the road in the Uptown Design District a new coffee shop is drawing a lot of attention.  But it’s in rather staid contrast to the eccentric gatherings at my Starbucks south of downtown. Developed by a local designer and developer, it’s called the Ernest Coffee Co. and Bootlegger Tiki bar. 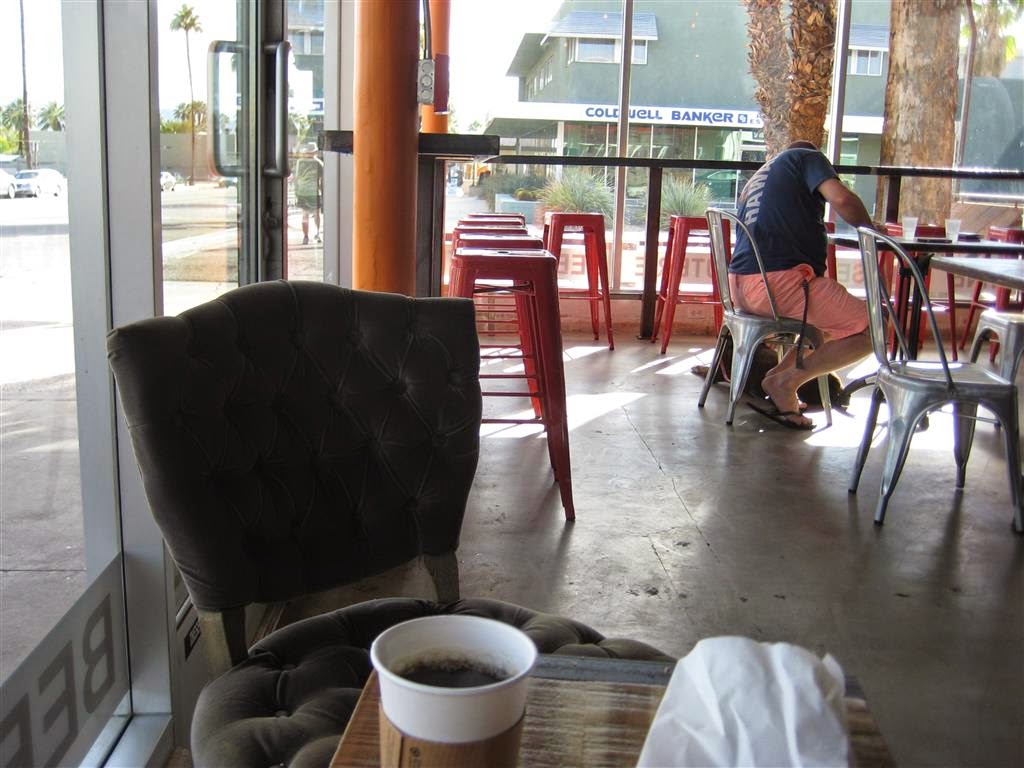 The space first opened as a Don the Beachcomber restaurant years ago.  Over time, it has gone through a variety of incarnations. This latest incarnation reflects the hip and trendy vibe that the design district now encompasses.  It pays homage to the Tiki culture of the 50’s while advancing the newer image of a hip Palm Springs gathering spot.  By night, it’s a colorful Tiki bar. During the day, it’s a gathering spot for locals and tourists alike. 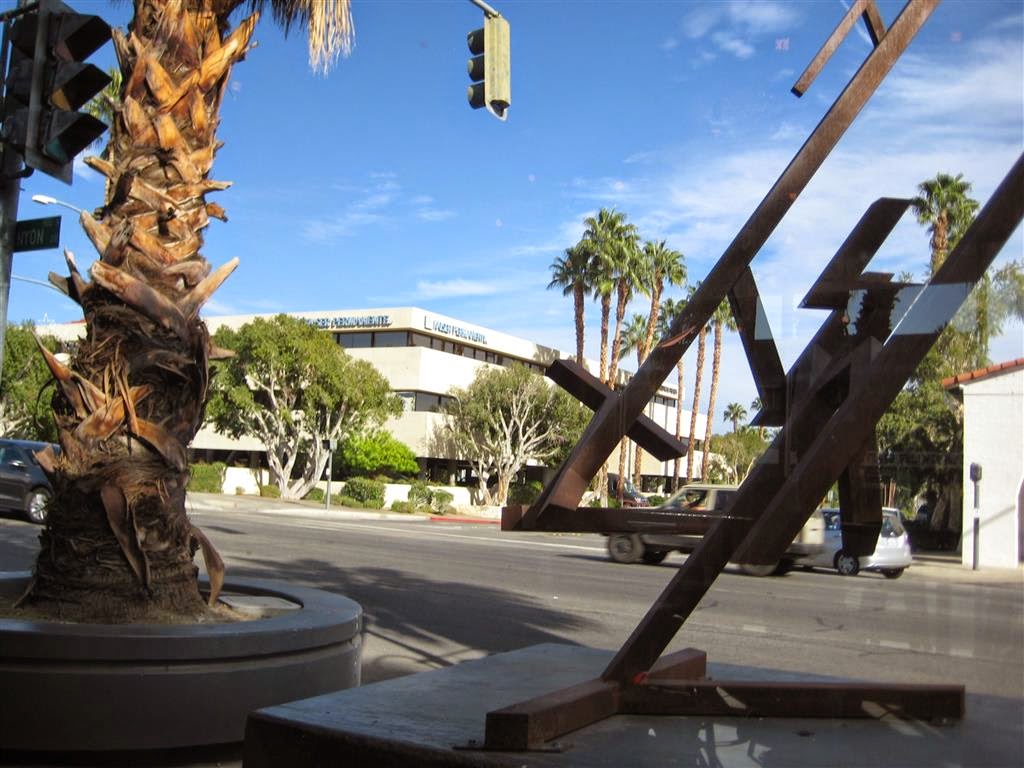 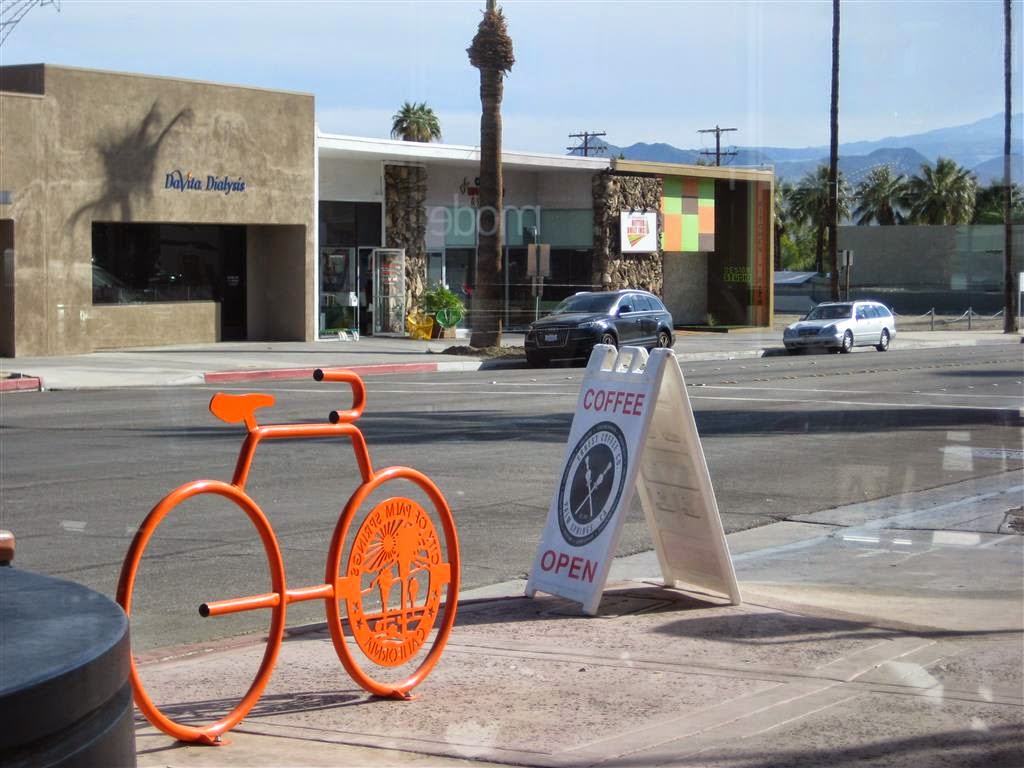 I like the coffee there and the relaxed atmosphere. There are cool sculptures outside and many of the buildings are mid-century modern. It’s the new façade of Palm Springs that’s been carefully crafted and honed. It’s a warm and welcoming place to get my morning jolt. Everyone there is smart and beautiful and ‘with it.’  They wear glam on their backs and in their attitudes. 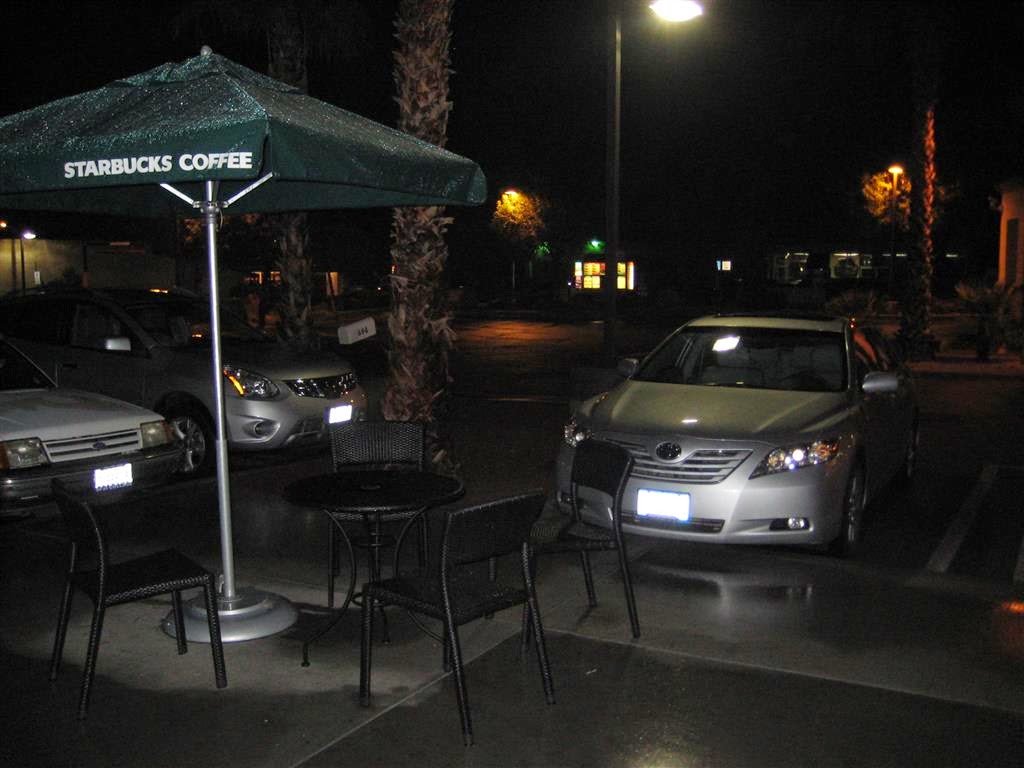 For all of its trendiness and hip vibe I still find the place lacking.  I guess I’m more drawn toward the jagged edges and dark shadows that lurk around my other caffeinated den of iniquity. That place has become my library of colorful characters. Any one of them can ignite my imagination with a mad scramble to jot down notes of comments made, inappropriate dress, unwarranted advances, and conduct unbecoming.

They’re all auditioning for a place in one of my novels.