My first attempt was a casualty of spontaneous combustion. Long term fatigue gradually set in and resuscitation was out of the question. I had to let my baby go and watch it die a quick and painless death. It soon became just another fading memory of times well spent that didn’t end very well. 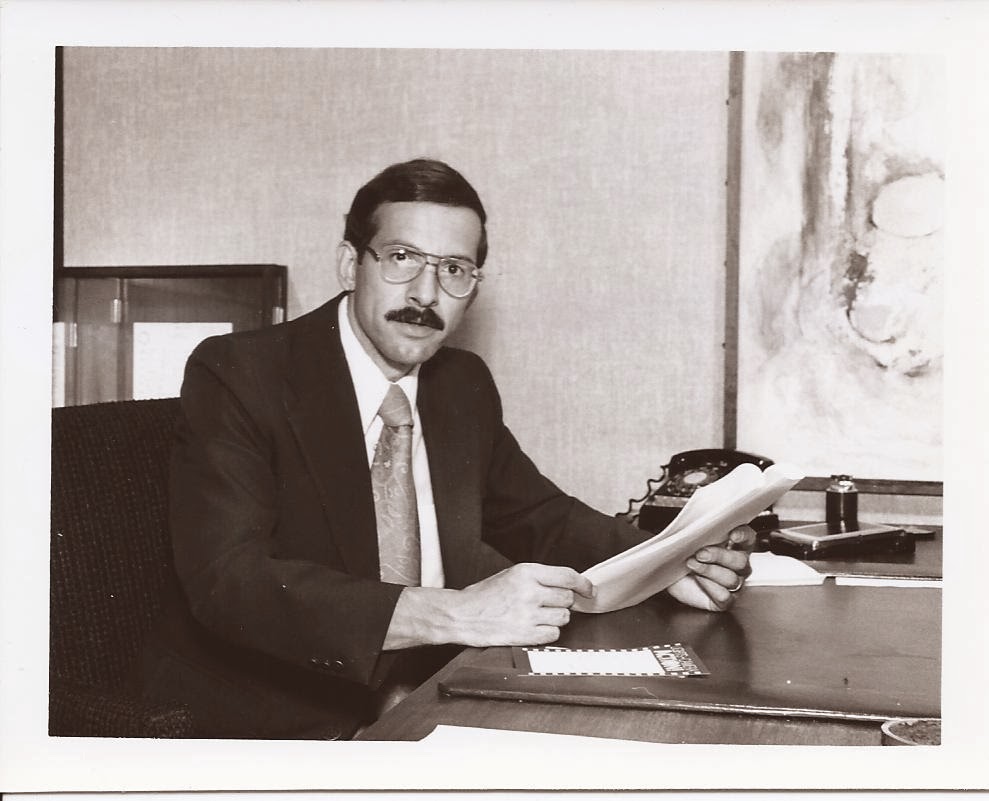 Less than a month later and still ensconced at Maryland Center for Public Broadcasting, I decided to forge ahead once more and give it a second chance. This second effort was an exercise built on high expectations, but once again, ending with disappointing results. Another year-long venture had ended in a whimper instead of a glorious flash. By all accounts, this sojourn west was destined for the history books of great expectations and even grander failures. 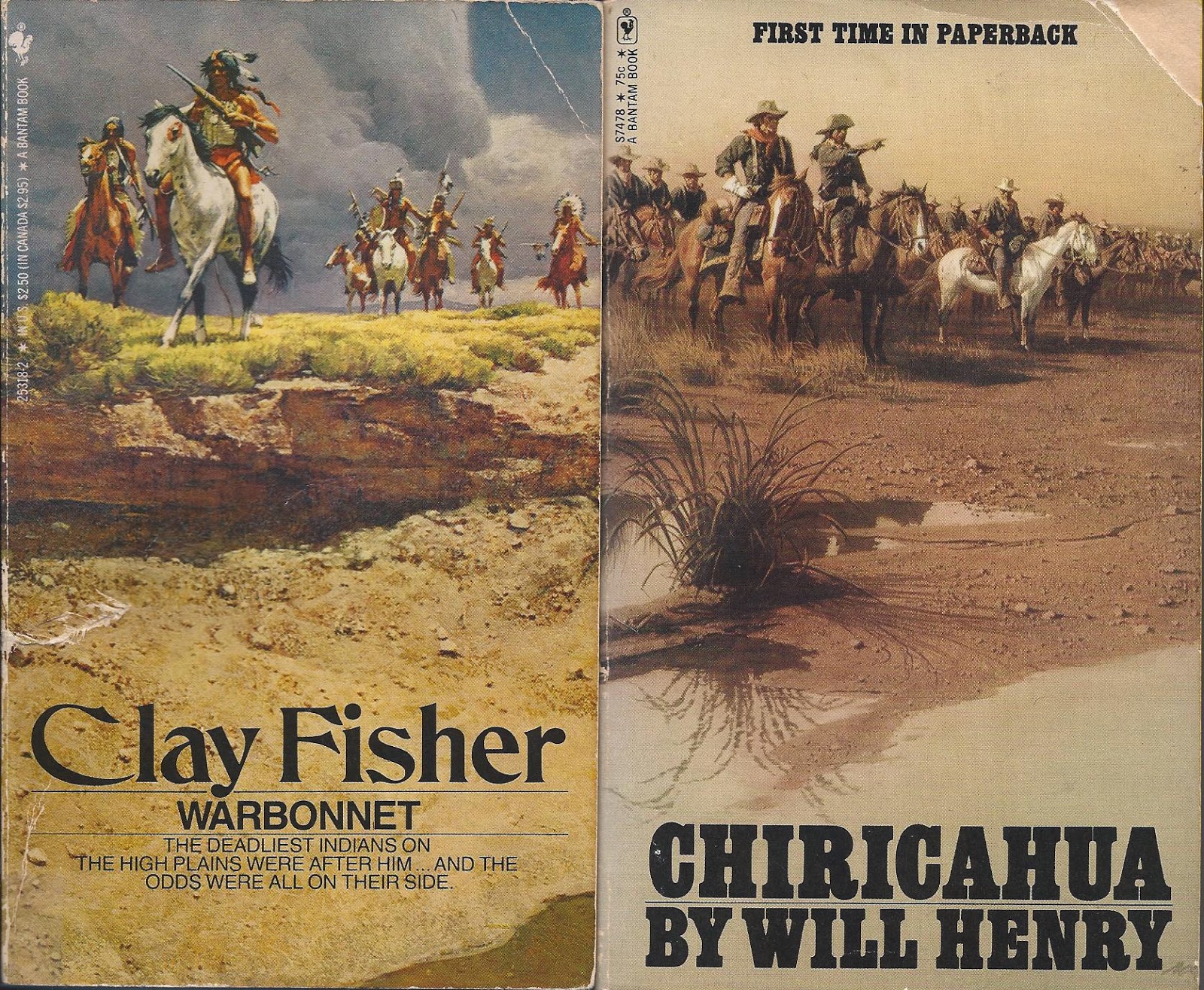 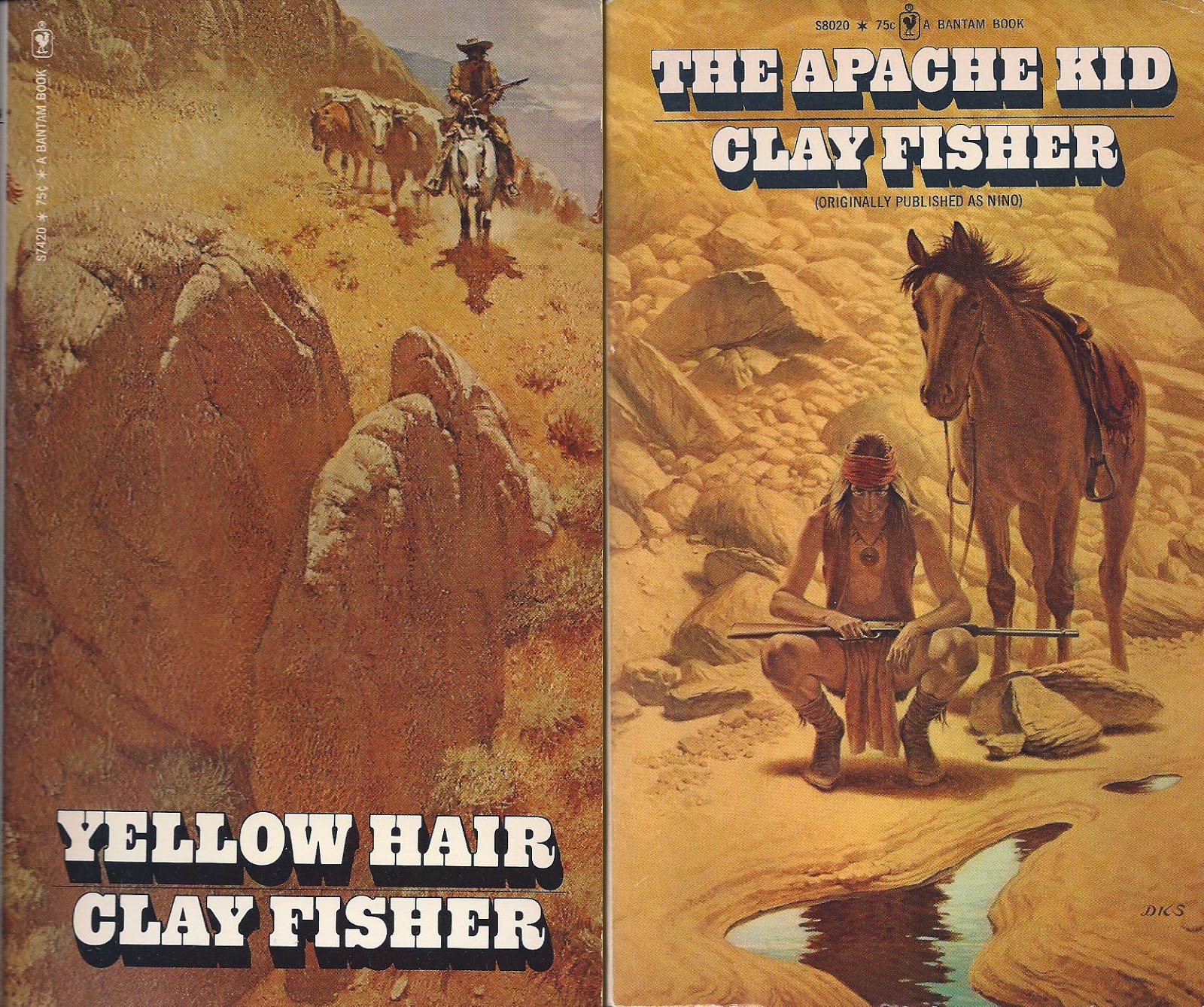 As a back story, I had been reading a lot of Clay Fisher and Will Henry, who it turns out, was the same author. The crusty old wordsmith had a way of capturing the essence of the old west without the burden of Hollywood clichés and Saturday afternoon matinée packages. He wrote about broken down old men and less than pure women. In his stories, the hero didn’t always get the girl and the girl didn’t always get to live. There was a raw and realistic tone to his stories that I wanted to emulate. And in recognition of my own Saturday afternoons spent foolishly, I wanted to recapture the flavor of the Fort Apache trilogy, John Ford westerns and John Wayne or Clint Eastwood at their buckskin best. 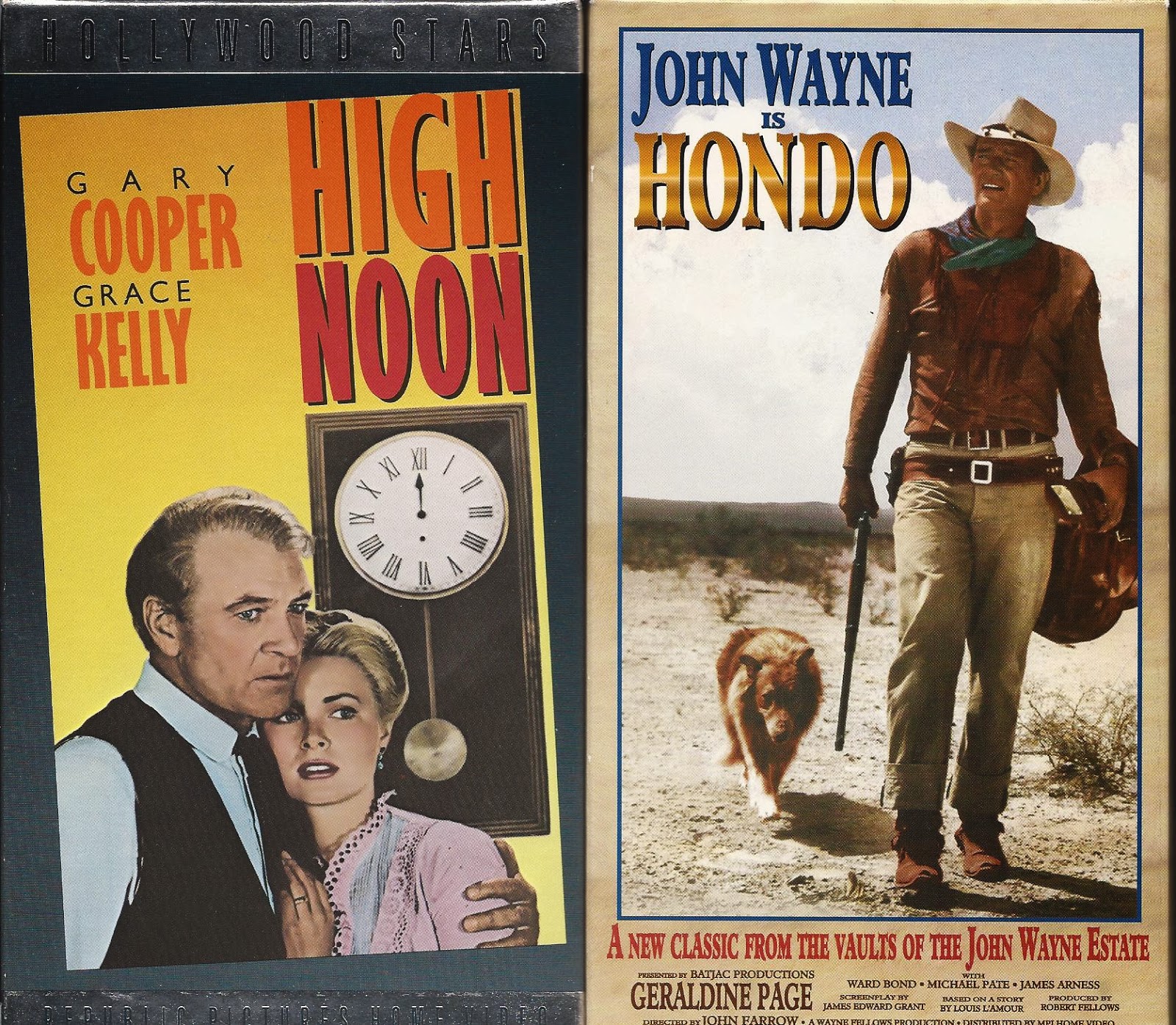 After four decades, I had file upon file of wonderful thoughts, ideas, concepts, dialogue and fading scratches on paper that haven’t seen the light of day for a very long time. It was a dustbin of treatments or fragment versions thereof that haven’t gotten past that first initial blush of excitement and hope and dreams and sometimes silly expectations.  It was a virtual catalogue of ‘what if’s’ that haven’t been strong enough or unique enough or poignant enough to make them worth pursuing any further.

My first stab at writing a western was entitled “The Hostile Trail” and the second was entitled “A Man of Two Tribes.” Upon completion, both were promptly filed away in some drawer in my office and I moved on with my life.

Despite my wife’s continuing insistence over the years that I go back to those two western manuscripts and attempt to have them published, I resisted. Neither one brought back fond memories beyond the typing and retyping (even with an IBM Selectric) night after night. I had simply lingered in ‘the zone’ for two years solid…too long.

Writing continued to be a part of my work life and reading evolved beyond westerns to a wide variety of plain and esoteric subject matter. I changed. The world changed. People, events, success and disappointment painted a rich tapestry in my memory bank…even if I wasn’t aware of it at the time.

Then in the mid-2000s, pending retirement and the gradual shut down of my video business forced me to revisit that first manuscript.

It changed my life. 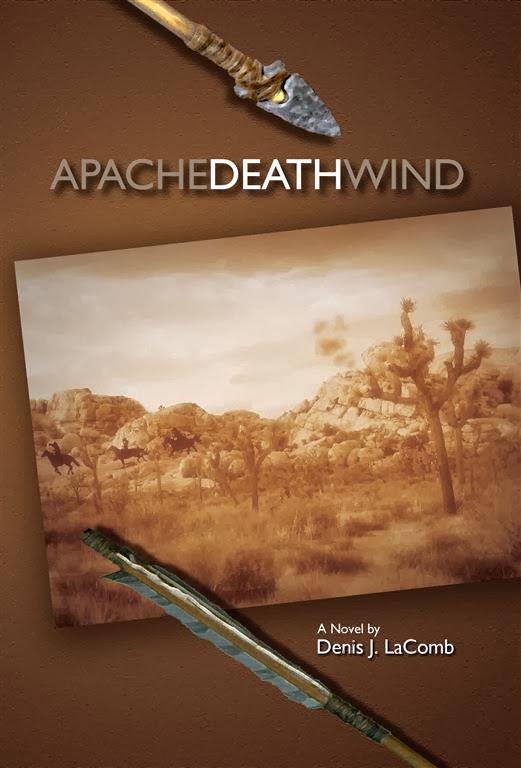 I’ve already blogged about rewriting that first western and self-publishing it under the title “Apache Death Wind.”  I Got to Play Cowboy Today and My Posse.

Even without any marketing effort whatsoever, sales began to grow. Then after advertising on Facebook, another audience in the U.K. discovered my book. Now Australia has joined the small but growing ranks of my western aficionados.

After the success of “Apache Death Wind,” I focused my energies on several other books. But I couldn’t let go of the ending for that first western. I knew there was a sequel just waiting to be discovered. But writing takes time and research even if I had an audience asking for more. Writing new material is a commitment of time and energy and I was reticent to begin the process all over again.

I was in a quandary…until another lone cowboy; a half-breed, in this case, suddenly appeared on the proverbial horizon. Damn, I was back in the saddle again and I didn’t even see this one coming.

Not that long ago, more out of curiosity more than anything else, I dusted off that second old binder and began to read my second western written back in 1975. I sat down to figure out what had gone wrong and was shocked to find myself totally engaged in the story line, the characters, plot development and suspense.

“Darn” (well, maybe I didn’t say darn) I said to myself, this isn’t too bad. In fact, it’s ‘darn’ good. Reflecting back on that second writing experience I realize now that extreme fatigue of two solid years of typing and retyping had gotten the best of me and I was simply burnt out.

There seems to be a growing audience for my westerns and now I suddenly had a second story to share with them. I don’t want to disappoint them even if I hadn’t expected to strap back on my holster, saddle up my mare and head out for parts unknown. I can almost taste the dust and heat and lurking danger just around the next canyon.

Vida, my editor, to the rescue. After scanning the fragile brown paper into a word document and some rewriting on my part, I handed the manuscript over to her and she resurrected a tightly written, fast paced western adventure story.

There were classic characters that my readers can enjoy following, hate with a passion, laugh at or cringe when they get themselves into dangerous situations. 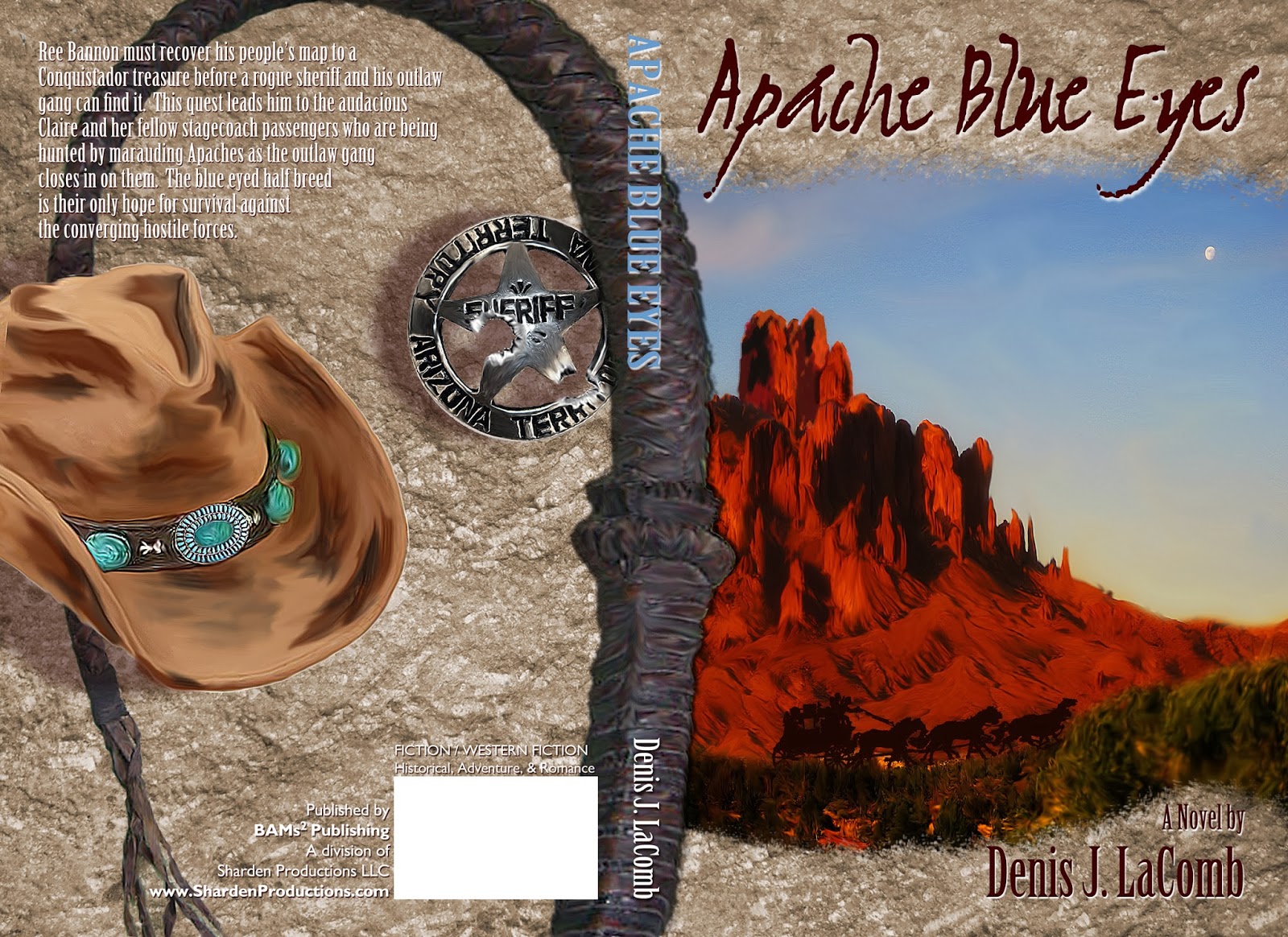 Synopsis:
Half-breed, Ree Bannon must recover his people’s map to a Conquistador treasure before a rogue sheriff and his outlaw gang can find it. This quest leads him to the beautiful and audacious Claire and her fellow stagecoach passengers who are being pursued by marauding Apaches as the outlaw gang closes in on them. The blue-eyed breed is their only hope for survival against the converging hostile forces.

But I guess I’m not done with the west just yet. I’ve finally begun writing the sequel to “Apache Death Wind.” 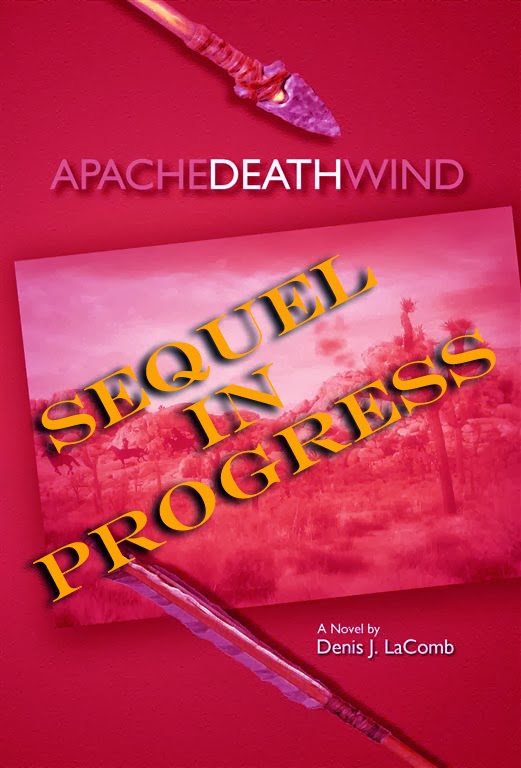 The first chapter begins with Jeb Burns, a hollowed-out shell of a man who has lost his only true love, Charlotte, and with it a will to live. He is about to enter a cantina where two Comachero brothers are about to meet their maker from Jeb’s Winchester rifle. His chances of escaping the forthcoming gunfight alive are near zero.

The second chapter begins with Charlotte in San Francisco reading a letter informing her that she is the sole heir to her Uncles ranch back in Arizona. A love interest back there wants her to return but there are evil forces bent on her demise before she even leaves town.

I’ll leave it at that. I hope to create a sequel that moves quickly, includes lots of action and a rekindled love affair that must face insurmountable odds just to survive.

Surprisingly, there’s still a market for this genre out there. It’s a small but passionate audience that shares my fear of night sounds where none should be, of sky-lined trackers picking up my trail, of a woman waiting for me and the inevitable gunfight that is sure to come.

I want to feed that audience and satisfy my own desire to once more climb onboard that tired old saddle and see what is just over the next ridgeline.

Three in the saddle now isn’t too bad for two casualties back in ’74 and ’75 that just wouldn’t die.
Posted by Author Denis J. LaComb at 11:18 AM