Sister Dorothy and the Myth of Catholicism 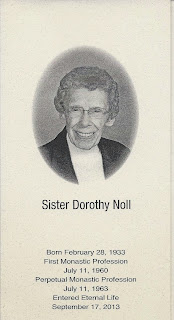 I went to Sister Dorothy’s funeral a couple of weeks ago.
Melanie and I and the kids drove up to the campus of the College of Saint Benedict in St Joseph, Minnesota. My sister Marlene and some other family members were already there when we arrived. I didn’t expect to find anyone else. Sister Dorothy was a nun who had spent almost her life toiling in anonymity in the mailroom on campus.

Yet I had to be there. Not to fulfill some family obligation or to say good-by to someone I really knew very well. Sister Dorothy was my cousin. But I hadn’t spoken to her for three years and much longer before that. Over the years, there had been a steady stream of Christmas cards exchanged and lately pictures of the grandchildren included. Her cards were always full of cheerful tidings and promises of prayers. But I never really knew the woman very well aside from the platitudes my mother used to heap on her simply because she was a nun.

Instead, I drove several hours north to say goodbye to someone who always treated me with respect when I was growing up. None of my other relatives ever did that. The adage at family gatherings was always the same…children should be seen and not heard.

I also wanted to pay homage to someone who embodied the true ideals of what it means to be a good person…without the label of Catholic or Protestant or being a member of any organized religion.

It turns out there were a lot of folks in the Gathering Place just outside of church. Besides the full cadre of her fellow nuns, there were close family members, extended family, relatives and friends. I was surprised at first but upon reflection it made perfect sense. Although she spent her life in quiet service to the Lord, Sister Dorothy touched a lot of lives through her simple life and kindness toward others. Simple acts of kindness can be a very powerful tool. Kindness and concern, the hallmark of these nuns, can trump a facade of ostentatious generosity anytime.

Most of the other nuns were older and frail like Sister Dorothy. Sadly their numbers are steadily declining. The mass was your standard affair replete with all of the vestiges and pomp and ceremony accorded to a soldier/sister in the army of God. It was a fitting tribute to a woman who had spent her entire life serving her lord and was pleased to do so. 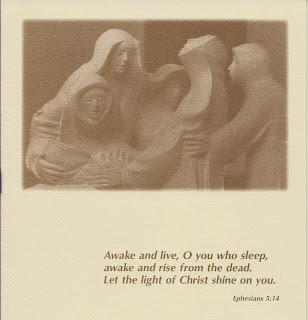 Sister Dorothy spent most of her adult life at the College of Saint Benedict, a small liberal arts college for women. It’s a great school. Melanie went there and got a wonderful education. But it’s not Harvard or Yale or any of those other icons of higher education. Yet in its rural setting, it embodies the true meaning of truth and simplicity.

Sister Dorothy was always an icon for my very religious mother who saw the good Sister as a child of God called upon to do his work on earth. Much like my other cousin, the doctor, my mother felt these two were among the ‘blessed people’ on earth. I didn’t quite see it that way.

Sister Dorothy never married, never had kids and certainly didn’t swim in social circles or any political arena. She led her life simply and honestly, sorting mail and praying every day as most nuns still do. Sister Dorothy wasn’t a CEO or a statesman or a philanthropist. She wasn’t awarded the platitudes normally associated with great accomplishments or wealth accumulation. She didn’t leave a legacy at the college other than her steady reliable service in the mailroom and her ever present smile to anyone and everyone around her. She was satisfied with her place in life as simple as it was.

She wasn’t a prefect or a manager or a higher up in her order. She hadn’t moved up the ranks not that I think she ever wanted to. She was married to her church and what it represented. She hadn’t accomplished great things in her life. The mail will still be delivered tomorrow and no one, aside from her close friends, will even know the good sister is gone.

Yet in her own very simple way, Sister Dorothy embodied the true ideals of what it means to be a Christian or a Jew or a Buddhist or a Muslim. She is a sterling example of true Catholicism.

Isn’t that the reason God put us on earth, to help one another. The church is supposed to be all-inclusive and not exclusive based on how the political winds are blowing at the moment. Sister Dorothy embodied all of those principles and more. She was true to the main tenants of her faith. She was what community is supposed to be all about.

It was so fitting that Sister Dorothy spent her life at the College of Saint Benedicts, a school where women are recognized for their individuality and uniqueness and intellectual capacity. It’s a breeding ground for alpha females who truly believe they can change the world…and often do.

So often, the nuns seem to understand it better than the church fathers do. Isn’t that just like a bunch of women to cut the heart of the matter and see clearly their mission on earth without the constraints of conventional wisdom or politics of the day. 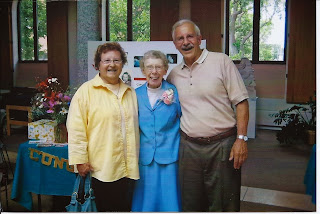 This summer, I went to Sister Dorothy’s fifty year anniversary with the Sisters of the Order of Saint Benedict. Marlene and I met a lot of our distant cousins that only death or Christmas cards bring together. They all represented my youthful years and as such are a part of the past that I left behind a long time ago. 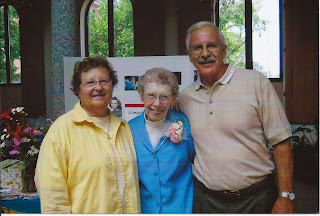 Yet the gathering was a good thing because it forced me to go back to a time and place where the simple things in life and kindness toward others triumphed over personal achievement and wealth accumulation. It reminded me of my rural roots, generation’s back, where hard work and labor were the hallmarks of a man and returned kindness was a gift not an obligation. 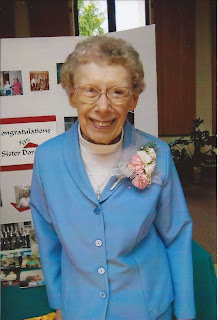 So I had to be there for Sister Dorothy’s funeral.

To return her simple acts of kindness.
Posted by Author Denis J. LaComb at 11:08 AM