Hell came in Khaki and Sweat 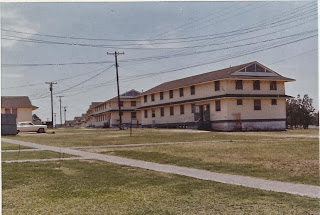 Back in my day, there was a saying among the enlisted ranks. The Presidio of San Francisco was the country club of the Army and Fort Polk, Louisiana, was its orifice.

Back then, the concept of air conditioning for army facilities was sketchy at best. The officer’s barracks and their dining quarters were air-conditioned. Some of the general offices were air-conditioned. But for the most part, any structure I lived in, worked in, drank in or studied in was window-ventilated and little else. 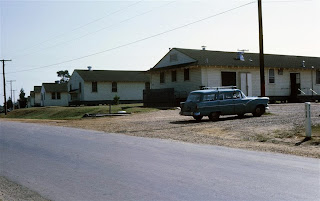 None of the barracks were air-conditioned. Bugs occupied the latrine at night, partying and carrying-on until they zapped themselves on the bare light bulbs. Heat enveloped the second floor during the day making it almost impossible to stay up there at night. Our barracks were surrounded on all four sides by Southern Pine forests and shifting sands. We called it hell on God’s green earth…and we meant it. It was an environment that nurtured and encouraged self-bravado. There were a lot of very lonesome guys on that base coping the best they could.

I took three showers a day and that wasn’t nearly enough. There were no stalls in the latrine so modesty went out the window. Everyone became very nonchalant about tending to their own personal needs. 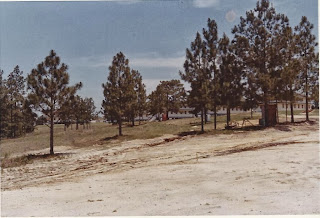 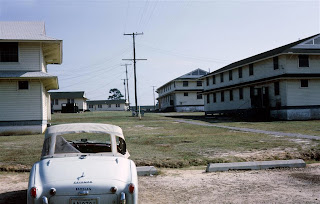 The closest semblance of civilization was either Lake Charles, Louisiana or Beaumont, Texas.
I spent many a weekend camping out in some hotel room in Beaumont just for the air-conditioning and television all afternoon and all night. I would wander the car lots just to stare at and fantasize about the car I was going to buy after the service. Bar-hopping wasn’t advised with my short cropped hair. Even in cowboy Texas, the locals weren’t too crazy about the military during the Vietnam era.

But like all my other bivouacs during those two years in the service, there were always colorful characters to either bright up and dampen my days.

The first lieutenant who was in charge of our Communications Office was a poodle officer. He was constantly playing politics so he could game the military system to his advantage. The dork had graduated from VMI but really didn’t want to be in the military in the first place. Fortunately he was newly married and spent as little time on base as his wife would allow. We kept hoping they would ship his sorry ass to Vietnam but it never happened. After his enlistment was up, he probably became a banker or a southern politician.

For a brief, painful period we had to endure the haughty attitude of some blue-blood from upstate New York. Apparently his parents weren’t able to keep him out of the military so he went into the Army reserves under the false assumption that he wouldn’t have to spend any time with the likes of us after basic training. He was only on base for a couple of months but his demeaning attitude toward blacks, the poor and under-educated (meaning anyone with less than an Ivy League education) made him a target for several clandestine operations against his bunk, desk and mini-MG. He didn’t really care. He hired low-life’s to do his KP and get his car repaired. Fortunately he was gone before fragging or any other radical action became part of our lexicon. 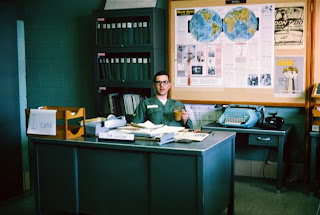 There was this portly office manager who was overly friendly to all the new recruits in the office. My gaydar wasn’t tuned in back in those days but I still managed to avoid any compromising situations around him. He once invited me to his place for the weekend but fortunately I naively declined.

I used to admire, from a distance, this black guy who used his color to get himself ahead with the black sergeants. He was always working on one scheme or another. It usually involved money or women; two prized commodities on or nearby the base.  I'm guessing he became a used car salesman after the service or something akin to that. But I’m sure he was successful at whatever he tried.

At the other end of the spectrum was a young sergeant who was hardcore RA (regular army – a lifer). He had a great career all mapped out ahead of him. He was a natural for the military. He had a wonderful rapport with his platoon and got along well with all the officers.

We knew he had met this divorcee with two kids. She worked at a bar off base and he was spending a lot of time there and at her trailer. We warned him to be careful but he just laughed at our concerns. Then one weekend, he went AWOL to spend the weekend with her. They threw his ass in the brig for a month and busted him down to private. He still had four years left on his enlistment. I couldn’t get over what he had sacrificed for that divorcee who was probably humping some new guy while he was still serving his time. Strange things happen to good people in the Army.

I had two main ways to spend my weekends at Fort Polk. I would either hop a Trailways bus to Beaumont, Texas (see above) or camp out in the Captain’s office with my good buddy from Vietnam.

My buddy (whose name I have long since forgotten) was recovering from shrapnel wounds he received in Vietnam. He had just a little time left before his discharge. And after facing death in Vietnam, he didn’t much give a rat’s derriere about taking chances in the military. We were both determined to make every moment count while we were stuck in the devil’s playground. Unlike a lot of our bunk mates, he also wanted to go back to college after the service. I don’t know whose idea it was at the beginning but we both agreed we had found a splendid way to spend those sultry weekends in Louisiana.

After Saturday lunch, we’d head off to the commissary to buy several six-packs of beer and snacks and perhaps something of a little more substantial nature. Then we would head back to the office.

Now the only room in our office building that was air-conditioned was the Captain’s office. If we closed the door to his office and turned the AC on low, anyone entering the front lobby would never know we were hiding back there. Since the Captains office was in back of the building, anyone walking or driving by would never know there were two inebriated celebrating GIs inside.

We would pile up the cushions off his sofa on the floor and somehow managed to waste the entire afternoon, evening and part of the next day by watching television, reading or just talking smack and filling the room with our dreams of going home and seeing our girlfriends. We were just a couple of randy soldiers full of wild dreams and impure thoughts. 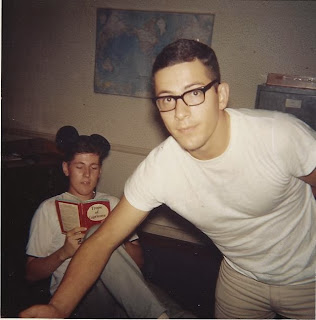 I have no idea why two knuckleheads like ourselves were so brazen and foolish. But it seemed like a fun thing to do at the time. We never got caught and I expect the Captain was never the wiser. Fortunately I was transferred before our scatter-brains thought up any other ingenious pranks to pull. My friend went home to who-knows-where and I headed up to Fort Lee, Virginia. And nothing vanishes faster than a man who has done his time at Fort Polk, Louisiana.

Reflecting back on that time in my life, it’s funny how such adverse, unpleasant, sad, depressing and uncomfortable situations can bring back such silly and yet fond memories. It was just a couple of footsteps and a blink away in my life but I’ll always remember those weekends in sultry Beaumont and the coolness of the Captain’s office.

Strange as it may seem, isn’t that what memories are made of.