Mexico before Captain Morgan and the Babes

The painful lesson I learned early on was never to go home on leave when you’re in the service. I did that once between boot camp and my first assignment in California. It was very brief but uncomfortable never-the-less. All my friends were still in college and I had five days to kill before heading out west with three Army buddies in an ancient Buick convertible and a case of beer. It was five days of boredom at home and a vacuum in my life before I got back on the road and into the swing of things. Even seeing my girlfriend was painful because of its brevity.

The second and last trip home was between my country club existence at the Presidio of San Francisco and the hell-hole during the summer known as Fort Polk, Louisiana. During that painful week home, I endured hours of boredom, aimless trips around town in my car and a very painful trip to the train station where my girlfriend was going to South Bend, Indiana for a Notre Dame weekend. Never again, I promised myself. I wouldn’t be going back home again until I was discharged and home for good.

So when my two weeks leave came up, I was determined to head south to the land of beautiful senoritas, soft sandy beaches and all the cheap liquor I could drink. It was a travel itinerary that only a love-starved, adventurous idealist could envision … little of it akin to the reality of the trip itself. I was off to Mexico and Acapulco for the adventure of a lifetime … or at least two weeks’ worth. 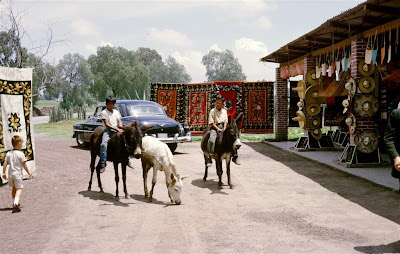 The travel guide assured me that the buses heading down to Mexico City were all air-condition-ed. That was true until most of the rural passengers rolled down their windows to get fresh air. We all endured hot air blasting through the bus for the entire trip. Near the mountainous passes along the way, our bus driver decided to race another bus ahead of us. It became a cliché most of the way to Mexico City. I kept envisioning the headlines about one or both of our buses careening off the gravel roadway and crashing down into the rock-strewn canyons below. When I asked my fellow passengers in my rough, crude Spanish about the driving, they just shrugged their shoulders and replied: “Si, Si.” Common behavior for the drivers, I guess.

This was Mexico in 1965 before drug cartels ruined the idealist picture we had of that wonderful country and Captain Morgan began competing with Patron tequila to seduce all the fair campus maidens on spring break. 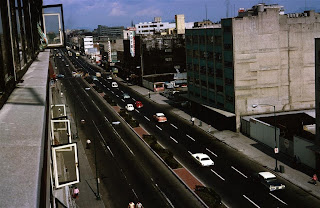 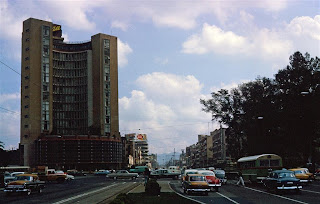 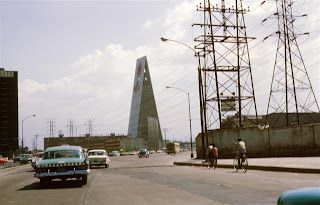 Back in ’65, Mexico City was a bustling metropolis of poor and even poorer folks. There were too many cars and trucks for the roadways and the smell of diesel fumes was everywhere. I never felt unsafe but the hotel clerk was quick to point out where I should and shouldn’t be heading out at night. 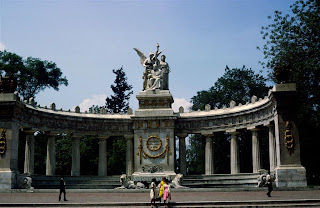 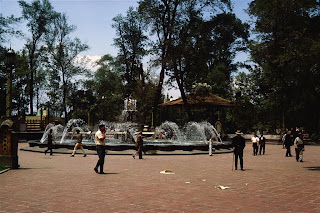 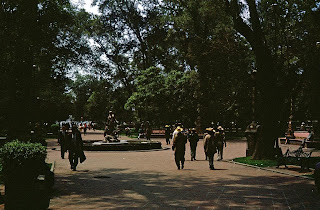 The University of Mexico had a beautiful library. The building itself was world-renowned and I spent several hours just wandering its many rooms and open spaces. I tried my Spanish but the smiles and chuckles I got in response told me I was making more a fool of myself than I realized.

One of my tours took me to the pyramids outside of town. 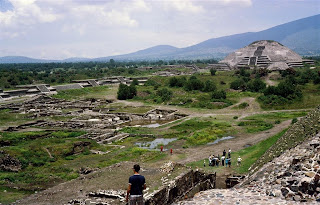 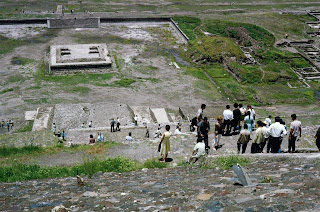 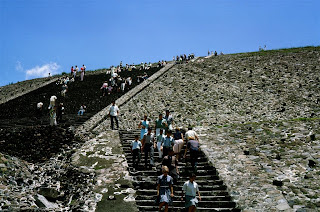 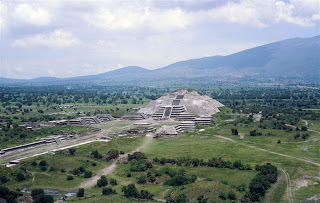 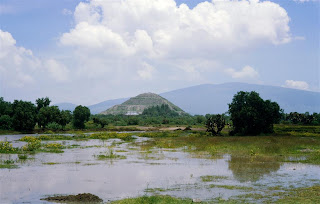 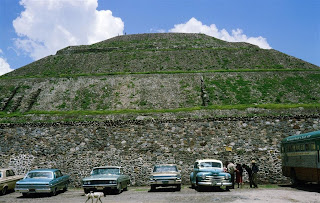 The bus ride to Acapulco was even more harrowing than the ride into the capitol city. Sheer cliffs edged the roadway as cars and trucks and other buses passed each other with impunity. Again I thought I was surely going to be another bus causality and tomorrows headline.

Acapulco was a beautiful, undiscovered beach town back then. It was world-famous for its cliff-divers, miles of soft sandy beaches and college students who came to party. The beaches were great. The cliff-divers were spectacular. But the college students never materialized. It was just another bunch of international traveling raga-muffins, lost souls from the states, rich kids on spring break and one soldier boy trying to hide his identify and fit in with the in-crowd.

We had been warned repeatedly never to drink the water. During my stay in Mexico City, I adhered to that warning and only drank bottled water, pop or beer. When I got to Acapulco and the beer flowed freely, my guard slipped a little.

I was lounging in some sea-side resort, nursing my beers and enjoying the sun and surf and abundant skin. A group of young women came by and asked to join my solo observation deck. They crowded around me and we began to wax philosophically about the states and school (I think I said I was college in the Midwest) old boyfriends and buff guys on the beach. I sucked in my gut and continued to enjoy their colorful company. As the only male in the group, I was getting a lot of attention and my head began to swell with wondrous fantasies of a questionable nature.

The waiter came by and we all ordered soft drinks. When he asked if we wanted ice in our drinks because the pop was warm…the cooler had broken down that morning…we call chimed in ‘yes’ and let it go at that.

The conversation continued unabated until storm clouds appeared in my stomach and loud rumblings ran spasms through my body. I was the first to feel the full impact of Montezuma’s Revenge. Luckily I made it to the rest room in time. But by the time I recovered and returned to the beach, everyone else was gone. I was there for another day and hoped I wouldn’t see any of them again…too embarassing. Thankfully, I never did. 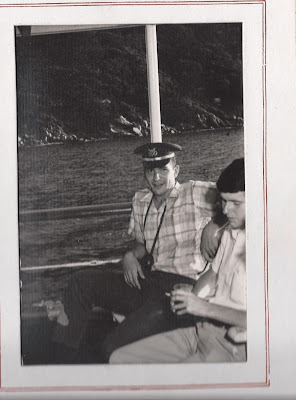 On a sadder note, I took a boat ride and sat down next to a pleasant blue-blood from the East Coast. He was on holiday with his parents and anxious to get back to his Ivy League school and perfect girlfriend. Everything he said about his life struck a sour note considering the condition of my life at that time. It would have been easier if he had been a jerk instead of a very pleasant privileged, talented young man on the rise. Not only was the world his oyster, his parents owned the whole sea bed at the time.

We shook heads at the end of our boat ride and promised to write one another. But we both knew our paths would never cross again. He was a nice guy but came from a different planet.

I wished him well and then headed for my bus and my own reality.