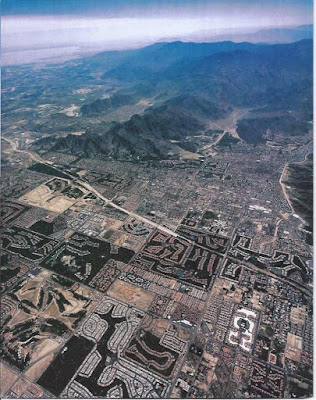 One of the joys of being able to spend time in the desert is the opportunity to get above it all. Palm Springs and its surrounding communities have an abundance of hiking trails for both the casual hiker and serious mountain goat. Trail access is available down the entire length of the Coachella Valley. Trails cover hundreds of miles through a variety of terrain and difficulty. For residents and visitors alike, mountain hiking is one of the perks of being in the desert.

Down through the centuries, Indian culture has always held their mountains in great respect. The first ancients to walk this country left their marks on those granite sentinels. Although much of the mythology and ancient teachings associated with mountains has been lost over time, some examples still exist today. 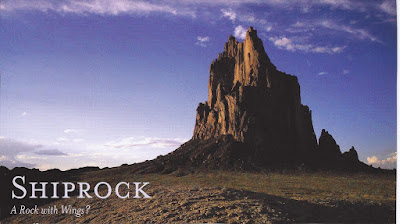 The Blackfeet have their Chief Mountain. The Potawatomi have their Chequah Bikwaki Mountain. More recognizable is Tse’bit’ai (rock with wings.) We call it Shiprock and it’s located in the state of Arizona. Our neighbor is not alone. California has a long history of Indian folklore centered on its mountains.

The mother lode of hiking in the Valley is called ‘The Skyline Trail’ or for those in the know ‘C2C’ which translated means Cactus to Clouds. It’s a ten hour (minimum) mountain climb that travels ten miles uphill for an elevation gain of over 8000 feet. It traverses three eco-zones and can be a killer for the uninitiated, especially in the summer months. Four hikers have died on the trail over the last dozen years from heat exhaustion. No wonder my kids just roll their eyes when I mention a desire to make that climb. ‘No way!’ is all my better half will say and she means it. 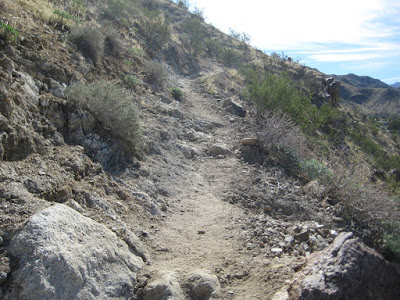 Another challenging climb, though not as dangerous, is called Murray Peak. Although it’s called a ‘hill’ at 2200 feet on most maps, Murray Peak is, in fact, the highest peak in the vicinity of Palm Springs. It’s been labeled a moderate to strenuous hike with a total distance of almost seven miles and a vertical gain of over 2200 feet. It takes an average of five hours for completion with only a few rest stops along the way. For the seasoned hiker it’s a refreshing walk up the mountain. For less conditioned souls, it can be a gut-buster and taxing on the lungs. In other words, a worthy challenge and goal for a seasonal visitor like myself. 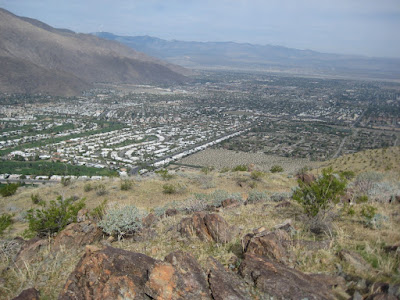 When I first started hiking in the Coachella Valley, I found a trail closer to home and a fun Saturday morning endeavor. It’s called the South Lykken Trail and is part of the North and South Lykken Trail that stretches for nine miles. It takes about five hours of moderate hiking to traverse the entire trial. The elevation gain is only about 800 feet and it’s considered a moderate hike by local standards. 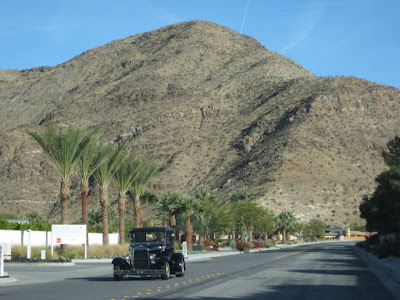 Then last season, another trail caught and captured my attention. This one is called the Garstin Trail. That old goat path climbs up over two miles that switch back and forth and practically stumble over themselves in the process. Elevation rises from roughly 700 feet to 1500 feet up Smoke Tree Mountain. The trail rises to a plateau connecting up with the Shannon, Berns, Wild Horse and Eagle Canyon Trails. Even for the most ardent, experienced hiker it can be a gut-sucking, deep breathing endeavor.

Now a new trail route awaits me in the fall. I’ve labeled it’ the triple crown.’ It’s a hiking loop that encompasses the Henderson Trail, Shannon Trail and Garstin Trail. A self-anointed, self-appointed trek for me that I’ve accomplished just once last year. The trails are moderately challenging in the loop that gains roughly 760 feet in elevation. The top of the mountain there is at fifteen hundred feet. Your average desert rat can cover that distance at a fairly fast pace. The rest of us old goats take a little longer. 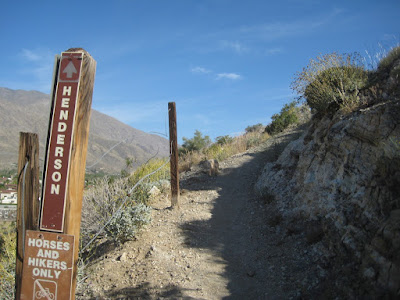 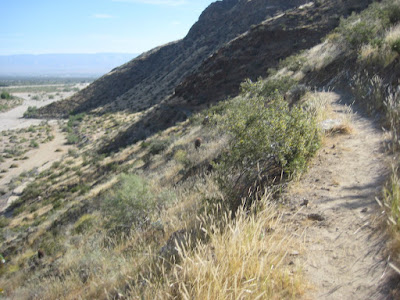 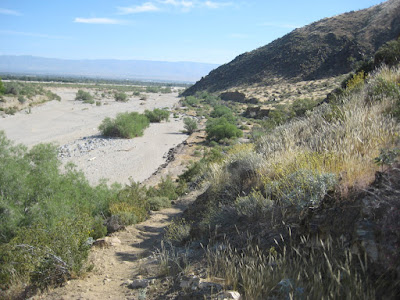 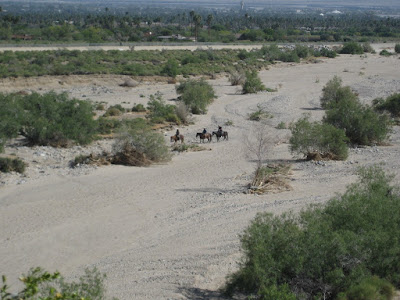 The Henderson Trail skirts a wash that comes down off the San Jacinto Mountains. It’s a rolling dirt path that dips and pitches with the elevation along the mountain side. Near the back end of the mountain, it connects to the Shannon Trail. 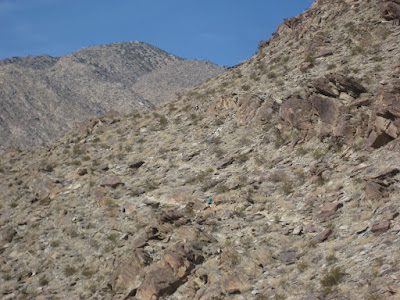 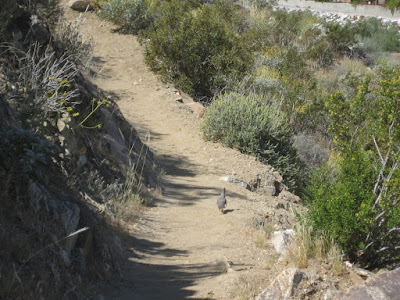 From one of the switch-backs on the Shannon Trail, one gets a panoramic view of my neighborhood, Indian Canyon, the San Jacinto and Little San Bernardino Mountains, the depth of Palm Canyon and the broad expanse of the community of Palm Springs. There’s Bob Hope’s house and other South Ridge celebrity enclaves perched high above the valley floor. 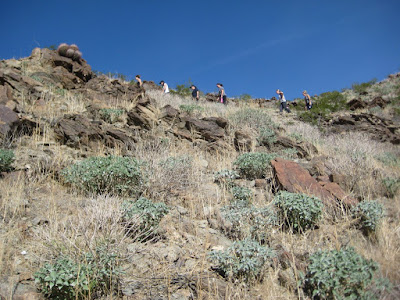 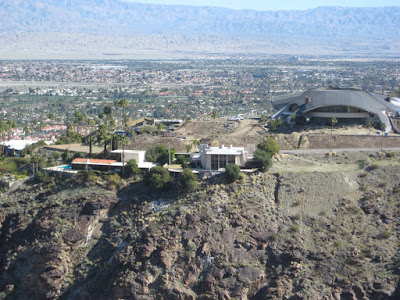 The Garstin Trail offers up spectacular views up and down the broad expanse of the entire eastern Coachella Valley. Something magical, almost spiritual, can happen during a mountain hike. It’s a physical as well as a mental challenge. At face value, it can be a day of hiking, climbing or finger-probing the rough crags and fissures of the mountain face. On a more spiritual level, it’s an assent into the vaulted realm of oxygen deprivation, aching muscles, sweat-drenched clothing and overall mental exhilaration…all to put your head in the right place. 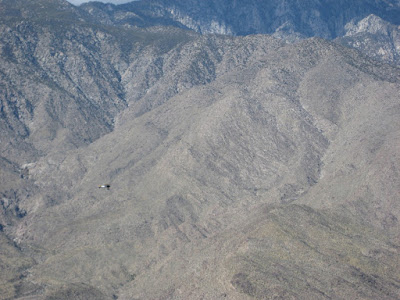 On one occasion a touring biplane flew below me, almost invisible against the surrounding mountains. Another time, a flock of birds soared below my feet. At face value, it can be an afternoon of hiking, climbing or finger-probing the rough crags and fissures of the mountain face. On a more spiritual level, it’s an assent into the vaulted realm of oxygen deprivation, aching muscles, sweat-drenched clothing and overall mental exhilaration…all to put your head in the right place. 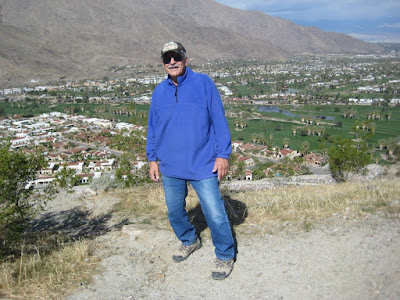 I’ve tried yoga, marathons and long trail runs. Collectively they can punish the body all the while soothing the soul. The Triple Crown is no different. It just takes a little longer to get to that place inside your head.