I didn’t see her, as much as I imagined what she was like when she first ambled into the room. That vapid image slowly morphed into a mind-picture right after the phrase ‘Riot at Sage Corner’ was ghost-whispered into my ear by forces still unknown. Somehow I understood that Sage was an older woman and although wrinkled and slowing down a bit she still carried a force of beauty and brain about her.

She was envisioned as an aging hippie on the backside of her life and stuck in a senior complex. I knew she bristled at the rigid rules and stifled attitude of many of her fellow residents. There was another protagonist in the story too; really an antagonist of Sage. It was Miss Margaret Maple, the self-imposed disciplinarian at the complex, and a nemesis to Sage and her disruptive antics.

What I wasn’t able to decipher right then was why Sage acted out the way she did? One thing I was sure of…that this lava lamp of images swirling around in my head might make for a very interesting and entertaining story...and maybe even a play.

So as a spec project I wrote a play entitled ‘Riot at Sage Corner’ and presented it to the Senior Theater Group at RAAC (Rosemount Area Arts Council.) It was an unproven treatment meant for a group of well-intentioned yet inexperienced seniors by an unproven playwright.To my delight and good fortune RAAC gave it a read-through and agreed to produce my play in the near future...near and future being relative.

Sage was probably lurking in the back of my mind for a long time. I just didn’t know it. My interest in and fascination with hippies goes back to my old Triangle Bar days on the West Bank of Minneapolis. Turns out, Sage was a compilation of a number of women I knew or met along the way to matrimony and kids and a new way of life.

I envisioned Sage first coming into the room carrying her Denver brownies in the second scene of the play. Those medicinal goodies added humor to the sketch and expanded upon the on-going conflict between Sage and Margaret Maple. The two women were like Sulphur and gasoline toward one another and just as volatile.They came to life almost immediately and their antagonism toward one another was palatable.

Then to mix up this cauldron of conflicting objectives even more I added a mysterious figure nicknamed ‘The General.’ His background proved the perfect mixture of patriotism verses individualism and sad memories verses cold reality. These and some other assorted characters were a delight to work with and helped move the storyline toward a startling conclusion and (I hope) enjoyable experience for my audience. 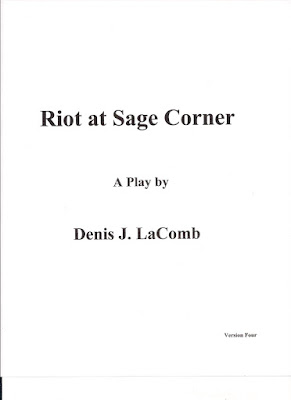 ‘Riot at Sage Corner’ was my first attempt (aside from a few blogs) to examine the aging process from the perspective of individuals who were living it right now. I wanted to address their fears and concerns, hopes and aspirations while not ignoring the pending life-changing circumstances surrounding them. ‘Riot at Sage Corner’ was also an attempt to help the senior theater group find a play that fit their criteria and could be easily produced by a group of amateurs. RAAC seemed to agree.

The Rosemount Area Arts Council was started in 2007 by four area residents who had been serving as advisors to the city about possible future use for a church that was closing in town. Their final recommendation was that the church be re-dedicated as a community arts center.

Part of the inspiration for this trend came from the work of the late psychiatrist Dr. Gene Cohen who headed centers on aging at the National Institute of Mental Health and at George Washington University. Dr. Cohen’s research concluded that involvement in the arts provides seniors with numerous benefits for mind and body.


Stuart Kandell who founded Stagebridge in Oakland, California in 1978, the oldest senior theater company in the U.S., has stated: “We all have a need for challenges in our lives. We have a need to keep learning. We have a need to feel like we’re giving back to other generations. We have a need for a social environment. Theater does all of that and more.” Then he adds: “The social element is huge, gigantic. The (theatrical) company for many people is like their extended family.”

Even at their initial meeting I could sense that the newly organized members of the senior theater felt this immediate theatrical comradeship too. Those lifelong road warriors seemed more than willing to embrace their future no matter how challenging or terrifying the theater might seem to them right now. 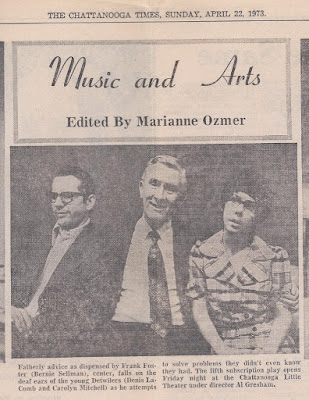 It’s been a while since I was involved in Community Theater. It’ll be good to get back to live story-telling again. Perhaps my play can help these seniors and others in this mutual journey of self-discovery. Hopefully we’ll all have a ‘riot’ of a time along the way.