There are a lot of tourist attractions in and around the Coachella Valley. Its unique location sandwiched between two mountain chains and close to the high desert make Palm Springs a treasure trove for exploration and discovery. The San Jacinto Mountains to the southwest and the San Bernardino mountains to the northeast provide breathtaking views any time of year. 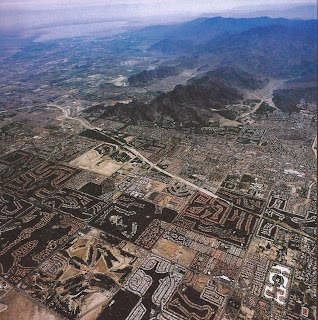 In 1936, a local civil engineer looked up at those mountain peaks and decided that it would be wonderful to be able to get up there quickly and escape the summer heat. Two wars and many dollars later, the Palm Springs Aerial Tramway was finally opened and became an immediate success.

The Aerial Tramway climbs up 10,834 feet to the top of the San Jacinto Mountain chain and its national forest. The tramway consists of the world’s largest rotating aerial tram; Swiss-made cable cars that slowly rotate as they carry up to 80 passengers and offer spectacular views all around. 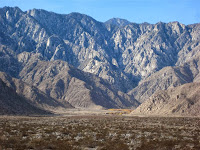 Located in an area called the Chino Cone, the aerial tramway provides spectacular views. But it’s the road leading up to the tramway station that challenged and fascinated me. 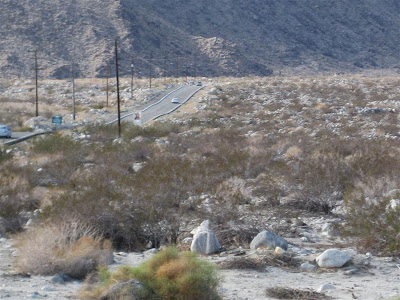 The only way to reach the tramway station, which is located at the base of Chino Canyon, is the tram road. Starting out at 800 feet above sea level, this black ribbon of asphalt twists and turns its way for three and a half miles to an elevation of over 2,634 feet. There are no level spots in that entire three and a half miles…it’s all pure elevation. Even for the heftiest of automobiles, it can be a major effort just to get to the base of the tram station. Buses and trucks always struggle to get to the base drop off point or parking lot.
For the uninitiated and foolish of heart, the tram road provides an appealing challenge for runners and bikers alike. There’s even an officially sanctioned road race called the Tram Road Challenge. In October of each year, more than 1,700 participants begin the run at the crack of dawn. Last year, the winning time was just under thirty minutes to run the three and a half miles. 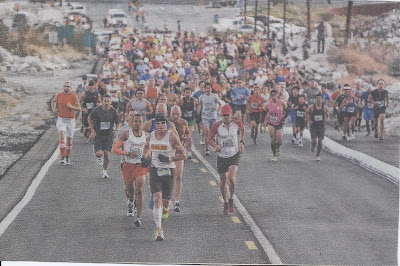 It’s a road-racing challenge not to be taken lightly. Hidden among the huge boulders that lay strewn all over the Chino Cone, the tram road is a wandering blacktop that has reduced all but the most experienced road runners and bikers alike into stumbling zombies. The asphalt ribbon of torture is a vertical climb of ball-busting, gut-wrenching torture that renders ones legs to jelly and back numb with pain. 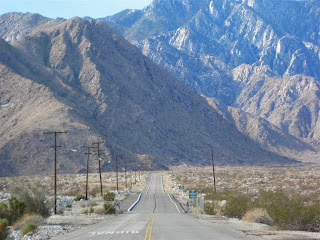 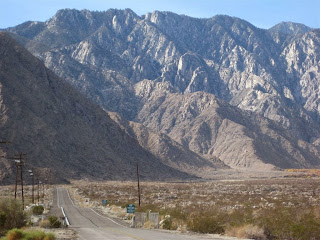 The area round the tram road is picturesque and beautiful in a very rugged sort of way. Encompassing a large area called the Chino Cone, the neighborhoods of Little Tuscany and
Vista Las Palmas sit amid a blanket of large boulders that lay strewn everywhere.

The ten minute ride up to the top of the San Jacinto Mountain float the cable cars over rugged, razor-sharp granite spheres that jut up from below like gnarly bent fingers in pain. The ride up is spectacular while the quiet on top of the mountain is almost deafening. The first thing you notice as you exit the tramway station for the surrounding forest is the overwhelming sweet nectar of pine. It’s almost like stumbling into a hippie hangout with incense burning and weed smoldering in another corner. 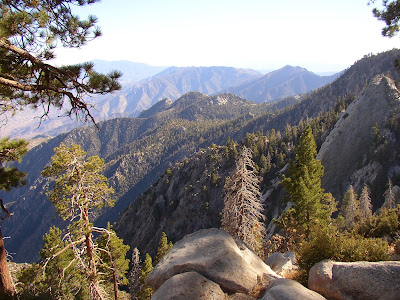 Hiking trails cut through the surrounding forests while giant Sequoia and evergreen look down on the novice and experienced hikers alike as they disappear into the green. 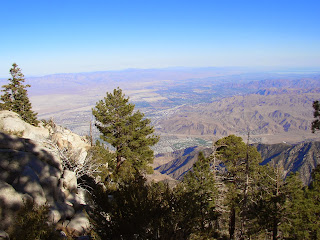 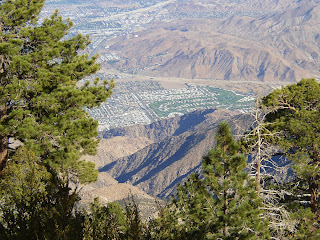 Along the edge of the mountain, huge boulders lay about; almost welcoming travelers to climb onboard and lay out in the warm sun and take in the vast expanse of desert below. From the windmills along the Banning Pass to the north and all the way down to the Salton Sea far to the south, the valley floor is laid out like some ancient mosaic painting.

It’s like an elevated tabernacle that lends credence to the wonders of that celestial architect.  Sitting on a sun-warmed boulder and marveling at the beauty all around gives one pause…and a true appreciation for his handiwork.

Oh, yeah, I ran the tram road last week…and lived to write about it.
Posted by Author Denis J. LaComb at 10:00 AM