On the Corner of Fairview and Summit


Its strange how one street corner can so clearly define a person; caught between the intersection of middle class and poor. How one location can highlight specific milestones in a person’s life amid critical junctures of multiple careers verses a mundane existence.

I guess it all began on the corner of Fairview Avenue and Summit Avenue in Saint Paul around 1924. Just 18 years old, my Mother had left the family farm for the big city. With just a sixth grade education (because she had to stay home to feed the chickens-seriously, you can’t make this stuff up!) she ended up as a maid for ‘those rich people’  on Summit Avenue. Think ‘Upstairs, Downstairs or ‘Downton Abby’ without the accent. It was back in a time when the delineation between rich and poor was very clearly defined and enforced. 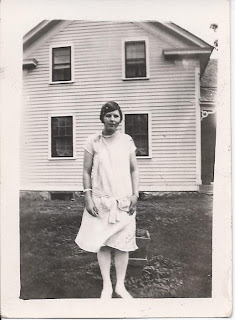 Fast forward many years to a home on Randolph Avenue (not that far away) where my mother, with the help of her brother, built her own home and my sister and I were raised. Then it became my neighborhood and upon reflection, I’ve come to realize that a lot of my life was defined, refined and affected by that neighborhood. 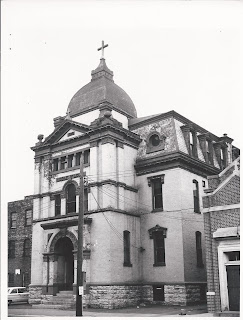 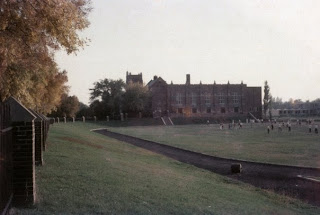 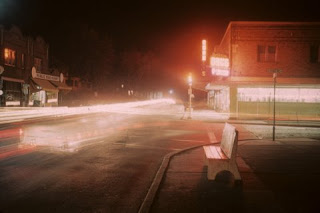 There were some good memories back there. Bus rides downtown to St. Louis Grade School. Walking to Cretin High School. A paper route that netted me $70.00 a month which was enough to pay for Cretin and give me a start at St. Thomas College. Finally graduation and the beginning of my ‘lost years’ and eventually focus and direction. 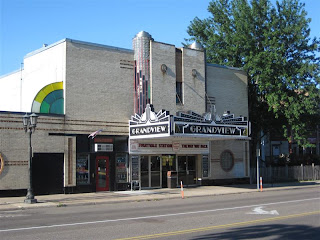 I discovered foreign films at the Grandview Theater while I was searching for myself. Beginning with the ‘Carry-On’ comedy series from Great Britain. Then French films with their candor in speech and skin, the Italian films that I could never understand, a few Australian films and finally back to the English films that probed the soot-covered grayer part of the life over there and in my own life. 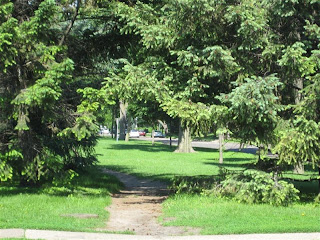 My first concrete recollection of Fairview Avenue and Summit Avenue was one of reflection amid the angst of an exaggerated demise of a fractured relationship. In retrospect, it was a long-time dying. I think she knew it was over between us long before doubts began to scratch at my brain. Even a trip back out east to mend fences fizzled and smoked but never flamed. It continued to linger on…at least in my mind. Until I finally got the call that inevitably ended with ‘but we can still be friends’ and that was about it.


The next day, I hitch-hiked to school and got as far as Fairview and Summit. I walked the rest of the way down Summit Avenue on that late winter sunny morning, humming a song I’d just heard on the radio, “Where have all the Flowers Gone” and in an instant the song created a memory implant that I still experience very clearly whenever I hear the song again.

For reasons I don’t really understand, that song became a wonderful standard for me to reflect upon the end of that part of my life and the wide open expanse of whatever might lie ahead. Of course, at the time I wasn’t so clear and focused and reflective. Instead I was feeling very sad and sorry for myself. Like Colleen in “Love in the A Shau” it was probably a smart move on her part but it hurt me a lot nevertheless. I love that song now not because of that incident but instead because of the memory it congers up of the bright sunlight reflecting off freshly fallen snow, the sound of my boots crunching on hard-packed ice and the self-induced bravado I filled my mind with to overcome the overwhelming sadness still lingering just beyond my consciousness. It worked and the song stuck.

Fast forward many years later, 16 to be exact, and I had investment properties just a half block away. After college, living in Europe for a while, a burgeoning career in television and starting up my own business, I took the next step. I’d always wanted to get involved in real estate. So with income from my business, I became a landlord.

I should have taken better notes because the stories I could tell would either be regarded as pure fantasy or ‘Tales from the Crypt.’ I tried to do everything right and for the most part I was re-warded with wonderful folks to serve as their landlord. But with a large number of people moving in and out of my buildings over thirty years, there were always a few standouts.

The fellow who lived in the basement for more than 16 years. He collected recyclables and had most of his apartment space covered with black bags of pop cans, paper ware, etc. He slept on a couch because his bedroom wasn’t passable. Nowadays, he’d be considered a hoarder. I just saw him as a bit eccentric and a great conversationalist. Despite all trash bags of stuff, he never once had any problem with pests or other bothersome critters. Amazing.

The time I got a call at 3:00 am because part of the ceiling in the living room had just collapsed on a guest sleeping on a sofa there. It turned out that the ceilings in each unit had been anchored (years ago) by wire instead of being nailed to the ceiling supports. I had to vacate each unit over time and redo each one of those ceilings.

The time I got a call around midnight in the middle of winter because water was pouring into a tenant’s closet. It turned out that the drain pipe which exited the rain water off the roof had frozen and was blocked up. I got drenched as I pried the outside pipes apart so that the water could drain off the roof and not backup into the building as it was doing.

The list could go on but it really wasn’t any different from any other landlord in an older apartment building. There was the peeping tom I never could catch. The wonderful garden I planted for myself and the tenants. My kids made good money there helping me on weekends. Ax Man and Riding Shotgun with Peter Pan

I had another couple who never owned a car and just got around by their bicycles. They were way ahead of their time. The rest of us are just catching up to bicycle transportation now. We still exchange Christmas cards with those folks.

I had another tenant who delighted in doing all my yard work for several years because she liked to work outdoors. I bought the flowers and plantings and she did the rest.

I lost heat in the middle of one winter. It was twenty below outside. That phone call came at 3:00 in the morning and the furnace wasn’t going again until 9:00 the next morning. Made for some scary hours with the fear of pipes bursting all around me.

But, once again, I met some wonderful folks over the years, anyone of whom I’d love to see again. Well, almost every one of them? 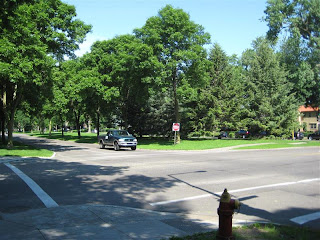 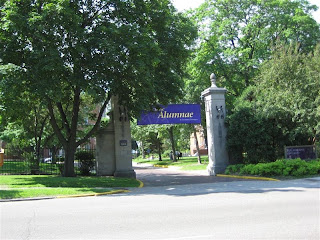 Passing the College of St. Catherine’s always brought back a plethora of memories from visiting friends in the smoker and being all nervous around so many girls (women, really), to school dances (like I knew what I was doing), to getting my date back just before curfew. I can still remember the one time I saw her maroon ‘66 Chevy two-door hardtop parked on the street right after our breakup and ironically never knowing that my future wife was on campus at the same time. 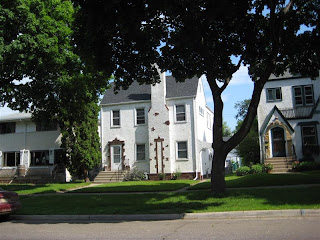 The duplex on Randolph Avenue that was our first home right after marriage. I remember the crazy lady downstairs who was always listening to our footsteps and complaining. Taking care of my sister’s kid there and wondering what it would be like to have one of our own. We lasted for just over a year in that location before shipping off to another job in Chattanooga, Tennessee…but that’s another story. 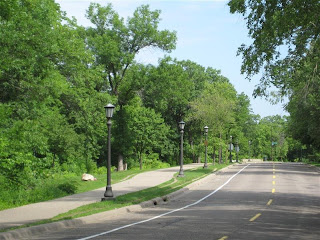 Summers were glorious on the river boulevard with their cooling breeze off the river and hordes of other runners, bikers, joggers, boarders, walkers and dog-handlers. Winters were a bear with the cold harsh wind blowing off the river and my slow methodically trudging through hard-packed ice and blowing snow. By the time I returned to my corner, I usually sported a walrus mustache and soaked layers of clothing. If I had stopped, I probably would have frozen in place. 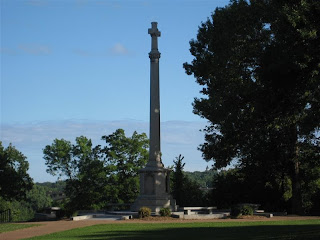 The Monument was where a lot of couples have consummated their friendship. Not me…I was never that brave or foolish. Although I’m told it’s still a great make-out place. 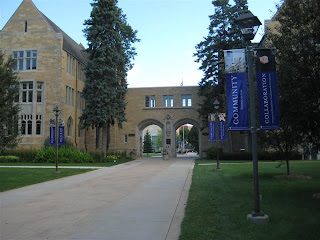 My college career began and ended at the College of St. Thomas over a six year period of time. I first started in the fall of 1961 and finally graduated in the spring of 1967. In between was two years struggling at CST then running out of money and transferring to the University of Minnesota which was an unmitigated disaster. Then the service and finally back to St. Thomas and finally graduation and off to Europe.

I’ve been in a number of foot races down Summit Ave over the years. Some went well, others not so much. My kids never understood why I was running if I was never going to win the race. 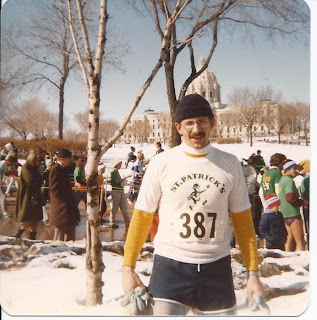 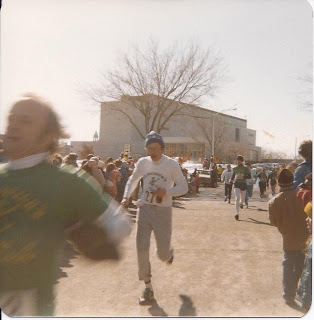 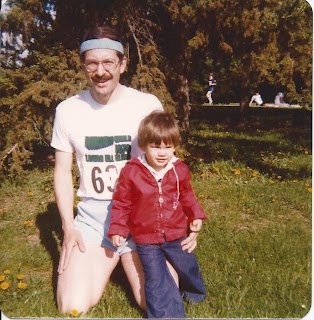 It was also the starting point for my training runs with Melanie for the Twin Cities Marathon. The first summer of training ended with an undiagnosed stress fracture that put me under for six weeks. No marathon that year. The second summer of training was shorted by a popliteal cyst which cut my training time down to sixteen weeks. That turned out to be the exact distance I ran in the marathon before ‘dying’ out there. A Life in Pictures. 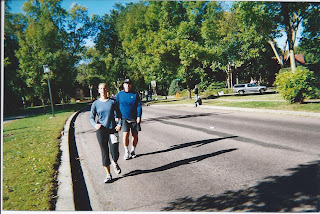 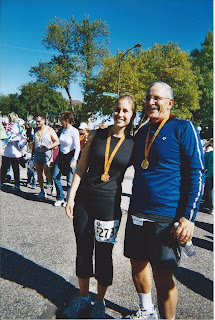 Now, long after the buildings have been sold and my marathons are a thing of the past (I think),  I still find myself occasionally on that corner, bicycle under foot and ready for another one of my long distance bike rides. 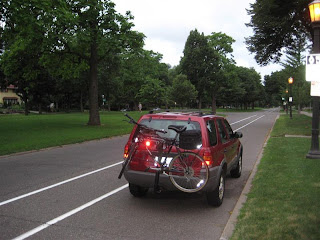 I’ve paid my dues and I don’t have to go back there anymore. Yet it’s always a joy to be biking down the Avenue, letting the wind blow between my ears, thinking happy thoughts and humming that familiar refrain “Where have all the Flowers Gone” amid the beauty swirling all around me.

And in my memories.

That was a great Blog, great memories