A strange thing happened between my last surrealistic escape from the Apaches and my traipsing back into the A Shau. I began to sell books, in fact, quite a few copies of “Apache Death Wind” according to Amazon. After less than two months in the marketplace, “Apache Death Wind” is now ranked in the top ten percent in terms of e-book sales for that western genre. Who knew? 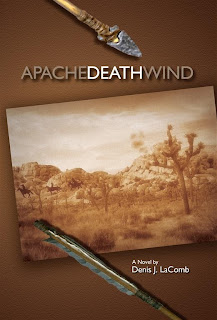 I had never envisioned myself as a novelist of western genre but circumstances seem to be pushing me in that direction and I couldn’t be any happier. As I’ve mentioned before in my blogging, I wrote “Apache Death Wind” back in 1974. It took a year of typing (for those of you who can remember typewriters) and then making corrections and retyping those same pages over and over again. That labor-intensive, painful process continued for almost a year until the book was completed.

As my wife loves to remind me, I then ignored her advice to seek publication and instead shelved the book and promptly began to write a second western. A year later, around the end of 1975, that second western was finished and also promptly shelved.

It was only thirty plus years later that I dusted off my first western, read it again and decided to see if I could get it transferred from its typed pages to digital format. I got it transferred to a floppy disc (remember those?) and began rewriting, editing, adding character embellishments and plot twists. “Apache Death Wind” was the result and from the comments I’ve received, the book seems to have hit a cord of great interest with a lot of readers. A number of those buyers are from England and their comments are particularly interesting. I’ve also gotten four 5 star reviews.

Another sign of serious interest in the storyline comes from the number of new ‘likes’ I’ve received to my Author page on Facebook. After many months of trying to attract folks to ‘like’ my page, I’ve now got satisfied readers ‘liking’ my site on a weekly basis. Their interest is sincere, in some cases passionate and always grateful for a wonderful trip back out west where men were cut from a different cloth and women might be soft of heart but never of character.

None of this might have happened if it wasn’t for my wonderful marketing collaborator, editor, blog poster and overall master of many things technical in the publishing world. It was Vida who convinced me to begin advertising on Facebook to a very targeted audience of western genre readers. We were both surprised to find that a sizeable audience for western genre exists in the U.K. We’ve been able to track our sales increase to the beginning of that advertising on Facebook. We started with a small ad on the side of the page then graduated to an ad in the news feed itself. It seems to be working wonders in terms of attracting my kind of reader to my novel.

So what to do next?

Even before “Apache Death Wind” was published, there was pressure building for a sequel. In this case, it was Michelle, another fine editor, book designer and collaborator, who felt the storyline begged to be continued in another book. I was reticent at first to do a sequel since I had always imagined the story ending as it had originally back in 1974. Fortunately, I listened to Michelle’s advice.

At first I was left pondering what might have happened to my two main characters, Jeb and Charlotte, if they weren’t together at the end of the first novel. Then ever so slowly, a new story started to emerge from the shadowy confines of my imagination. This new tale gradually began to morph into a story of love lost, a man bent on suicide and a new beginning gradually growing for the two main characters. Of course, circumstances bring them together again but not always in ways a reader might imagine.

The more I worked on a treatment for the sequel, the more excited I got about the characters and what happens to both of them after the end of “Apache Death Wind.”

As it is written right now, the sequel opens with Jeb sitting across from the cantina where two bandit brothers are holed up and waiting for the rest of their outlaw gang to return. Jeb, ever true to his word, is determined to eliminate the two brothers just as he had promised the villagers. At the end of the first chapter, Jeb arises and begins to walk toward the cantina, rifle in hand. It is a suicide mission but since he’s lost the love of his life, he doesn’t really care any longer.

Charlotte is established now in San Francisco. She has become very successful with her own tailoring business and has put her past life with Jeb behind her…or so she believes. Then she is approached by a lawyer with news that will change her life forever…

The plot gets even more complex after that.

Finally, a sequel to ADW had been outlined and although no time frame had been committed for its creation, I had a solid storyline in hand. But I still had ‘A Shau’ to republish and ‘Debris’ to rewrite and ‘Cobbler’ still waiting in the wings for another rewrite. I thought I had my writing projects clearly defined…

That is until another lone cowboy; a half-breed in this case, suddenly appeared on the proverbial horizon. Damn, I was back in the saddle again and I didn’t even see this one coming.

Despite my wife’s continuing insistence over the years that I go back to that second western written in 1975, I resisted because I remembered it just wasn’t very good. Then, not that long ago, out of curiosity more than anything else, I dusted off the old binder and began to read my second western. It’s entitled: “A Man of Two Tribes” although I expect that title will change over time. I sat down to read the story and was shocked to find myself totally engaged in the story line, characters, plot development and suspense. Much of it is good as it is written. I don’t expect a lot of rewriting and editing will be required.

I couldn’t believe it. I had another western just waiting to be redeveloped and I hadn’t even considered it. If there’s a moral here, it’s to listen to what the women in my life have to say, they’re usually right.

Much like the first western, I’ve had those typed pages scanned into a word document and I’m now rewriting it in tandem with my work on ‘Debris.’ While there’s no firm publication date, it will come out before the sequel to ADW is finished.

There seems to be a growing audience for my western stories. I don’t want to disappoint them even if I hadn’t expected to strap back on my holster, saddle up my mare and head out for parts unknown. I can almost taste the dust and heat and lurking danger just around the next canyon.

I Loved Apache Death Wind & can't wait for the other westerns.