She’s as beautiful as any parent could ever imagine.

Coming into this world at six by nine inches, weighing in at just under three ounces.

I’m a parent for the third time and it feels wonderful. Again.

The gestation period began as rambling discourse inside my head. It was a jumble of disconnected thoughts about women’s equality, class differences, poverty, education, the sexual revolution of the sixties, the war in Vietnam and a dozen other disjointed sometimes fleeting bumps against my brain that somehow stuck there. And wouldn’t fade away.

She began life as an embryo, germinated by fifty-six pages of dialogue, scene descriptions, historical facts, character analysis and reflections on my own experiences during that turbulent period in my life.

Originally, the genesis began as a story that followed a group of college freshmen through four years of school in the Midwest. I wanted to place the time frame in the sixties because that was such a colorful period of social conflict and change. Within its storyline, relevant themes would include Vietnam, class in America, the hippie culture, drugs and alcohol, women’s new-found sexual freedom, the old guard vs.young revolutionaries and finally, the impact of Vietnam on a soldier’s life (even though I never served in the Nam.)

But by the time those disjointed thoughts, ideas, concepts and mental ruminations were scratched across fifty-six pages, those concurrent themes had evolved into a story of just two college freshmen. A man and a woman who were radically different in their upbringing, education, family structure and social mores. It took six rewrites before I figured out that the one common denominator between the two of them was their ambition. He was born hungry. Her desire for success was genetically implanted from her father.

After the fetus had taken shape, I began an arduous journey back in time and memory to a period I had long since forgotten; what I would eventually call my “Lost Years.” There were historical books to peruse, documentaries and movies to watch, yearbooks to browse, letters and pictures to study. All in an effort to build an organic storyline that was true to that time and those characters. And even though the storyline kept straying off course when something noteworthy was found and absorbed, it stayed true to its original intent.

The vernacular journey surprised me at times as it became a cathartic experience that unearthed a plethora of emotions from my past; many of which I was able to transpose on to my characters even as it evoked an emotional chain-reaction within me.

Then began the long and difficult task of editing, rewriting and more painful editing from a first round of 471 pages to a more trim but still eventful 381 Pages.

Some of my characters began life with one name but ended up with a different name. Those name changes began one pleasant evening when I was out to dinner with another couple and my wife. It ended that same evening with a series of verbal fisticuffs that left me bruised, battered and enlightened. Beginning with appetizers through the main entree and into desert, this trio of friends, editors and critics counter-punched every argument I could muster not to change some of the names in the story. They finally wore me down with their logic and reason. And in the end, I had to agree that the core essence of the story wouldn’t change with different names to some of the characters. It was a humbling but necessary exercise to protect my avatars from possible future scrutiny.

Only real friends would rake a novice writer over the logical coals like that, ripping away at the soft warm comfort I felt in my creation, all under the guise of making my baby better and me into a tougher-skinned writer. It hurt like hell but I have a better story for it. I’m grateful for friends like that.

Her original name, through seven rewrites, was “Love and Ashes.” But after numerous Google searches, I found that name had already been taken as a religious book written in the mid-seventies. “Love in the A Shau” became her name shortly afterwards. Now that I own the domain name “Love in the A Shau.com,” I finally feel like a real parent.

Michelle was my mid-wife, helping shepherd the PDF files into electronic bites and bytes. One form took shape under the clan names of Kindle, Nook, Sony e-reader, Kobo, etc. The other was born in POD (print on demand) embodiment.

The deed is done. The book is published. 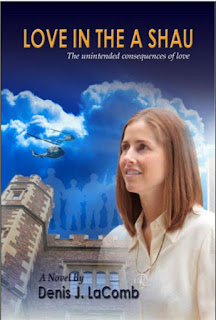 And all those wonderful characters I cherished and cared so much about are now permanently encapsulated in print or bites and bytes.

So now it’s time to move on and let the real nurturing begin. I have the challenging task of promoting and marketing “Love in the A Shau” as well as branding myself as a writer.

Of course, in addition to shepherding “A Shau” into the real world, there will always be new lives and loves to create, embellish, edit and capture in a new storyline. Creating “A Shau” was great while it lasted but I’m anxious for the next maturation of my imagination to begin.

I want to become a parent all over again.
Posted by Author Denis J. LaComb at 10:58 AM