Indian petroglyphs are a rarity around my neck of the woods. A few have been found far back in the canyons that cut and slash through the foothills of our surrounding mountains. They are the earliest paintings we have on record here. In turn, they have begun a long local tradition of capturing the mystery and beauty of the desert. Long after the last of the ‘ancients’ left their scratchings on cave walls another kind of painter entered our desert studio.

By the late 1800s, the dry desert air proved to be a haven for tuberculosis patients who came to the Palm Springs area and the high desert to recuperate and recover from their illness. A few of them were painters and word began to spread back east about the vast desert wilderness with its stunning mountain backdrops as a special place to paint.

But the real breakthrough came in the early 1900s with the growth of the plein air movement in painting. “plein air” derives its meaning from the late 19th century French term “en plein air” or translated “in the open air.” The phrase was used to describe the practices of the French Impressionist painters who sought to capture the effects of light and atmosphere by completing their work out-of-doors and by using loose, open brushwork and vibrant colors.

Many experts believe the plein air movement attained its most dramatic articulation in the desert of the southwest especially in the distinctive quality of light sought and expressed by the early California desert painters. Local artists such as Carl Eytel in the early 1900s and later John Hilton in the ‘40s helped spread the word of this desert wonderland as a magnificent natural palette.

Another one of the famous painters of that era was Stephen Willard who wasn’t a painter at all. Originally a photographer, Willard is best remembered for his iconic postcards from the Palm Springs area. After color painting some of his local photographs, Willard found a ready market for those paintings as postcards. Each postcard perfectly captures the true essence of the iconic Palm Springs lifestyle.

Gradually the movement lost its power and modern art came into vogue. Then in the 1970’s, California impressionism soared back into favor among collectors. Art itself like some strange virus continued to grow unabated in the valley. Now every community seems to have its own art walk, festival, show or art tours. Three distinct areas have slowly morphed into showcases for some of the most popular artists in the valley. 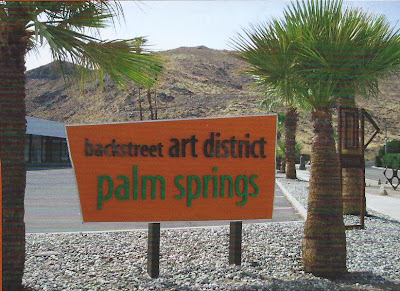 The Backstreet Art district is located several miles from downtown Palm Springs. Located in an old strip shopping mall, there are dozens of artist-owned galleries and working studios which feature paintings, sculpture, photography, jewelry, ceramics as well as performing arts.

A much larger area for artists is located north of downtown Palm Springs. Usually when an area is labeled with a catchy moniker, it’s just an attempt to categorize an image for a gullible public to glam on to. It’s often just a brand that some hack created back in the hinterlands for the benefit of some publicity-seeking city administrator. It’s like naming neighborhoods so the realtors can have something to label in a pretentious way and charge more for the housing there.

In the city of Palm Springs, North Palm Canyon Drive was a slow growing area where local artists could find cheap rent outside of the main part of town. At one time it was a barren stretch of boarded up storefronts and half empty motels that offered none of the glamor and cache of old or new Palm Springs.

It was like Greenwich Village and Soho and Dumbo before the beats and hipsters and other so-called outcasts found a home there. And like those venerable neighborhoods, the Design District also found itself home to struggling as well as established artists looking an appreciative audience of like mind souls. 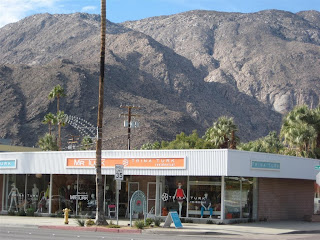 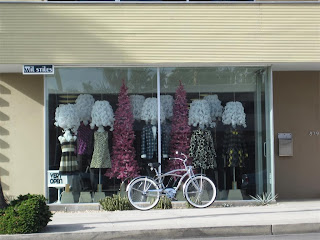 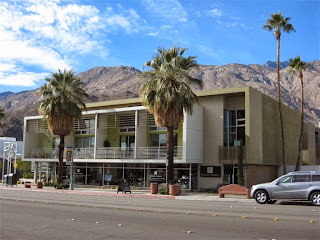 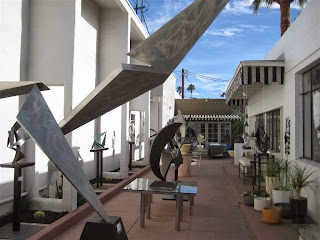 The area is now thriving with notable shops such as Trina Turk, thirteen forty five, just modern and a pop-up store called Raymond/Lawrence. That store describes itself as ‘a new indoor marketplace with handpicked pop-up shops by creative brands.” They make no secret of the fact that they are selling the Palm Springs lifestyle in home décor, furnishings, men’s and women’s fashions and fine art. 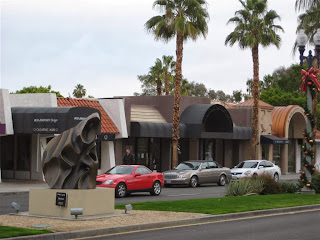 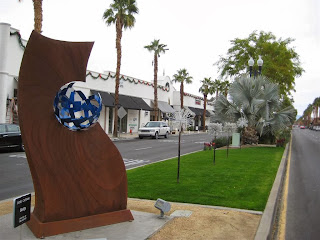 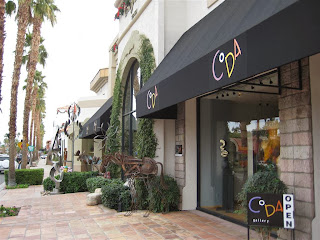 El Paseo is the ultimate in artistic regeneration and commercial display located down the valley in Palm Desert. It’s a mile long commercial strip that is generations and millions of dollars from the mud huts of early painters deep in the desert. It is meant to embody the style and elegance of high society in the desert. This art-strung boulevard houses over 250 retailers, professional services, renowned restaurants and locally owned boutiques. It is the ultimate avenue for anything and everything you never knew you needed. 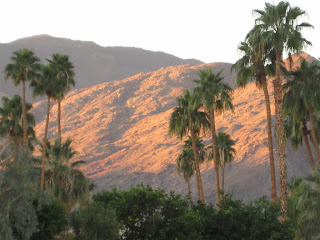 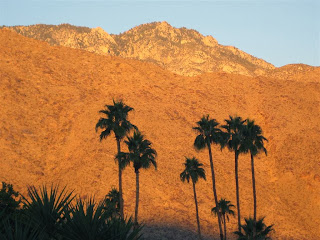 Yet as much as time changes the flavor of art, we still get to immerse ourselves in the daily show all around us. Each morning, sunlight still dances off of the mountain sides and the casts imaginative shadows over our lives.

It’s like a new show that takes place every day and we get to be in the audience and live it along with that celestial talent from above.
Posted by Author Denis J. LaComb at 2:00 AM