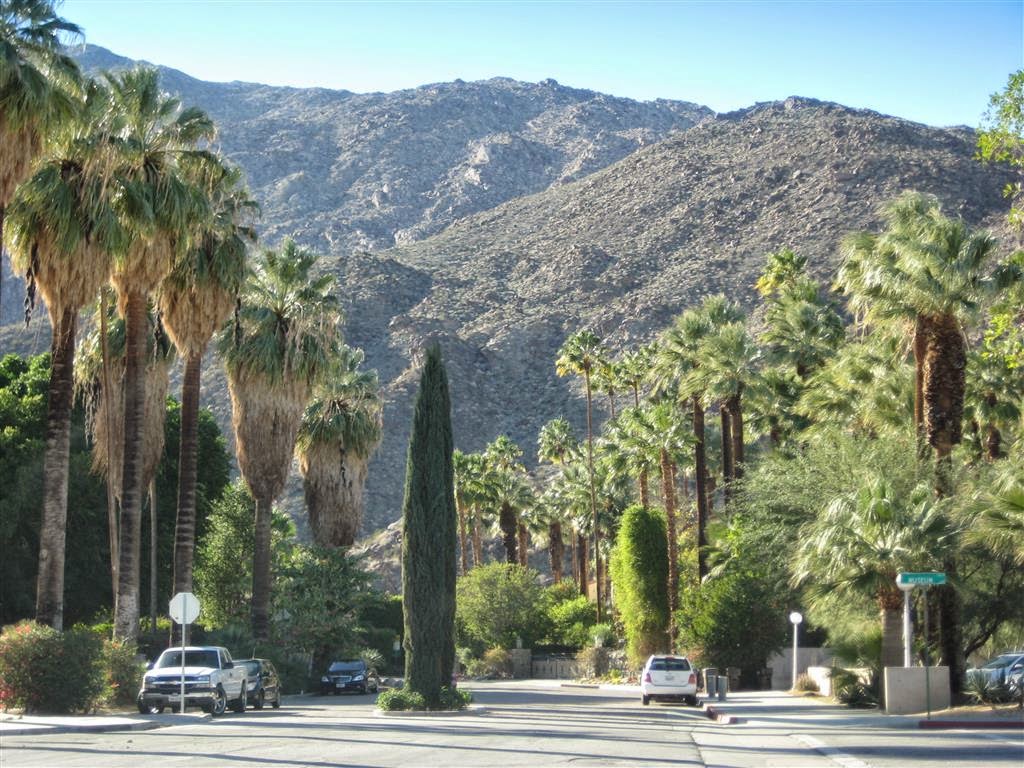 The bride was radiant in her low cut, slit thigh-high bejeweled dress.  The groom looked distinguished in his dark blue tuxedo. They were getting married and we were invited to their reception. If their grandchildren had been there, they certainly would have remarked how happy the couple seemed on their wedding day.

This was a Palm Springs wedding but one without the requisite cute little flower girls, beaming parents and young attendees anxiously awaiting the dance and drinks afterwards.  Welcome to the wonderful world of romance set in Palm Springs and replete with its own set of rules for love and marriage among the senior set.

After knowing each other for quite some time, the bride and groom finally decided to get married.  Now on the back slope of their full and active lives, these two lovers decided that a walk down their back patio was entirely plausible and right for them.

The wedding and reception was held at the couple’s home in the Tennis Club neighborhood just west of downtown Palm Springs.  It’s a picturesque area steeped with over a hundred years of romance and love in its history. 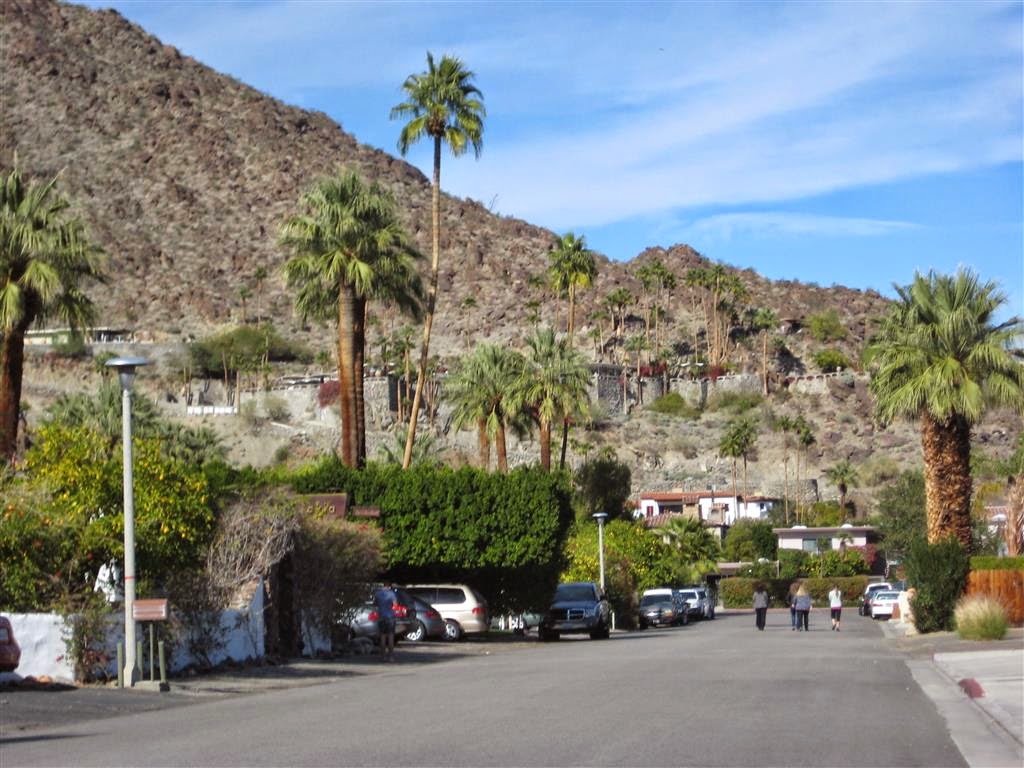 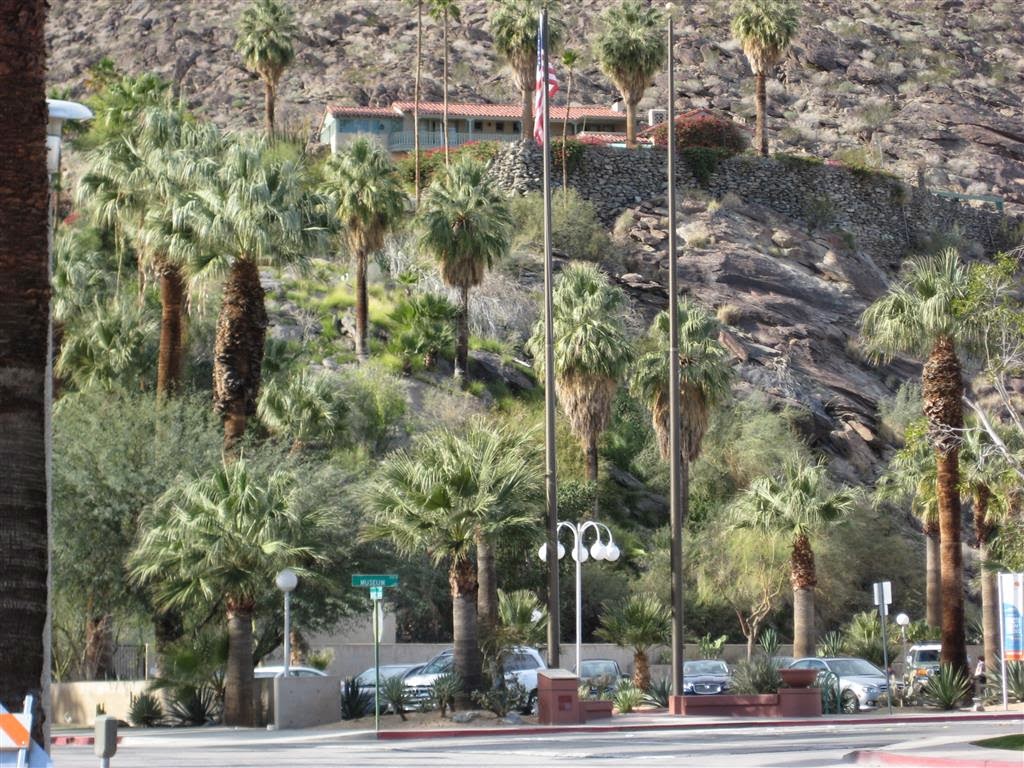 Its surrounding mountains form the oldest neighborhood in Palm Springs. Life there began in the 1880s with one of the first settlers to the area. San Francisco Judge John McCallum tried unsuccessfully to develop agriculture in the desert sands. The first settlers in the area lived in homes made of adobe, railroad ties, and clapboard. 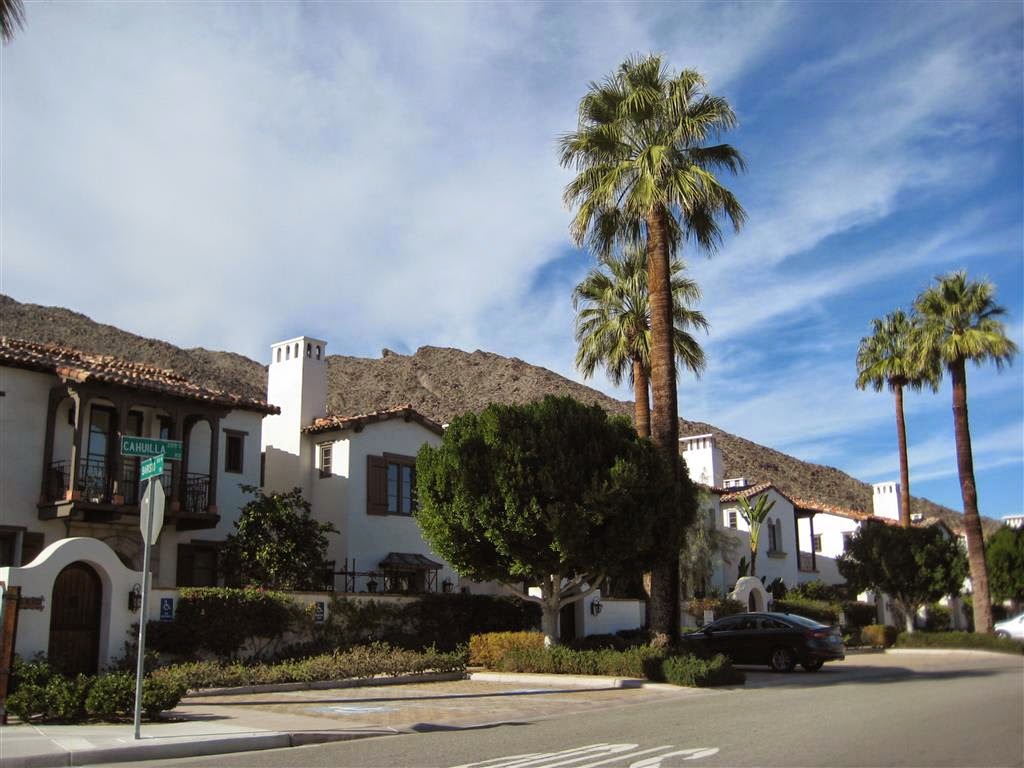 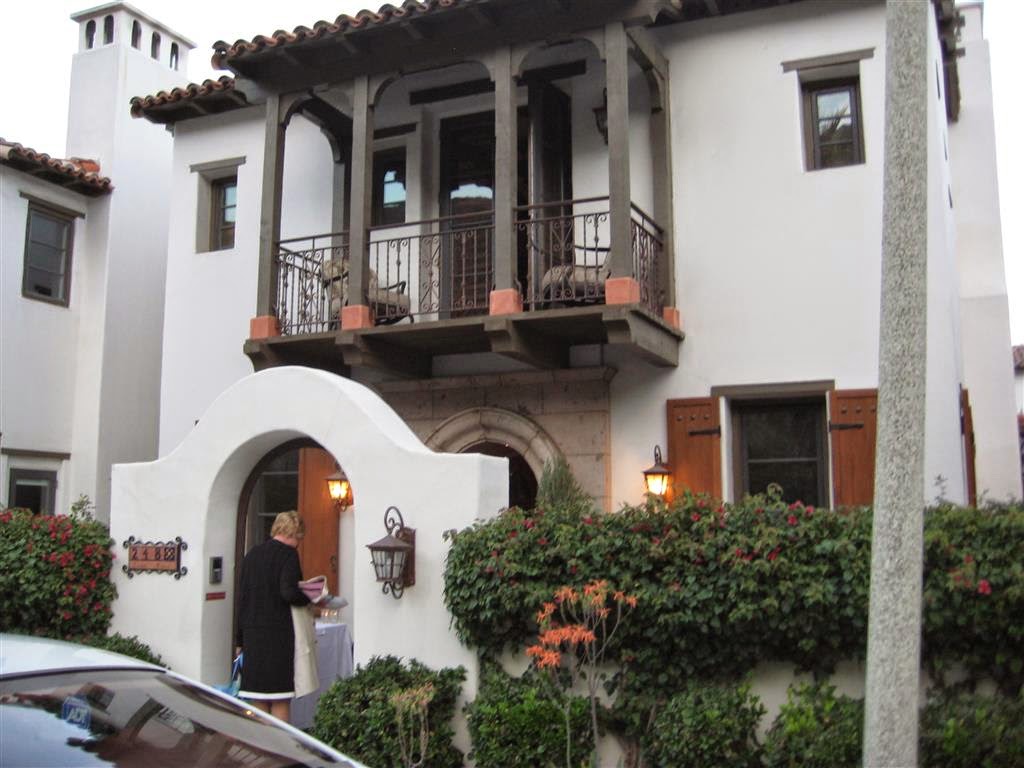 The neighborhoods unique charm is highlighted with its eclectic mixture of over 400 homes, condos, apartments, small inns, boutique hotels, and upscale restaurants, many of them surrounded by historic stone walls.

Secluded behind those walls the tabloid stories began and have continued to multiply over the years.  Lucy and Desi first came here for their weekend escapes from Hollywood. But long before that other Hollywood celebrities came there under a cloak of secrecy to get away from the maddening crowds. Starlets galore have always haunted the area in hopes of being discovered. It’s all written on the bedroom walls and in literature promoting tall tales of yesteryear. Most of it is true and what is exaggerated still helps sell a lot of hotel rooms. 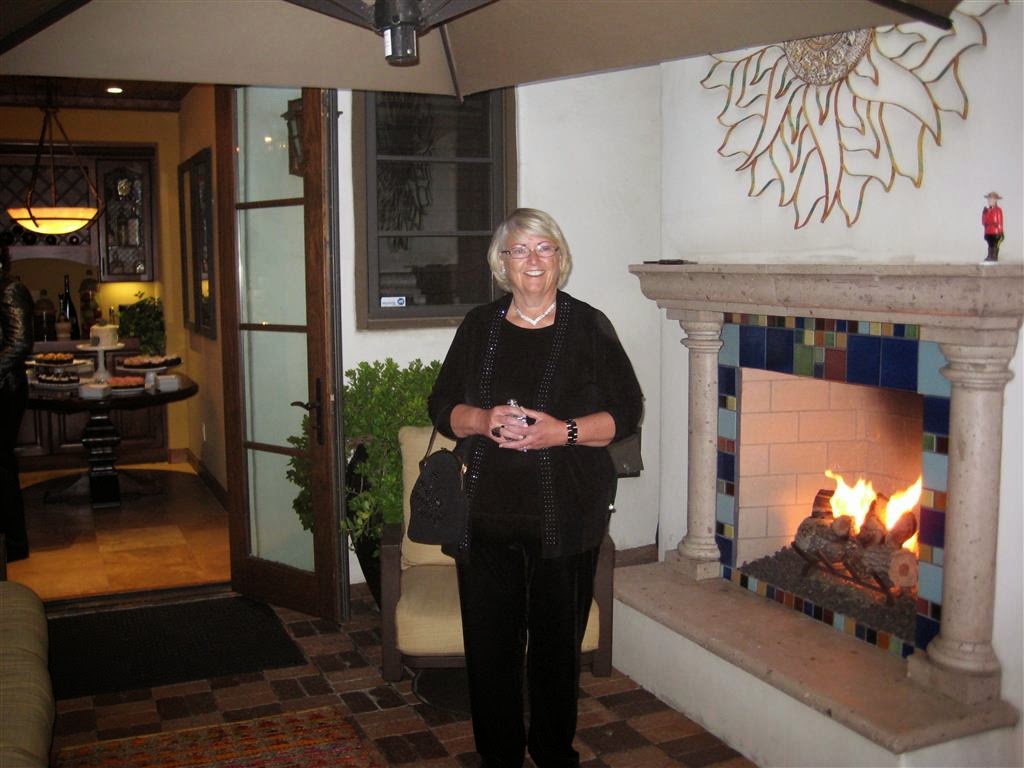 Many of the wedding attendees were members of Sharon’s swim group.  They were a mixture of full and part-time residents. Much like our neighbors around Indian Canyon, these were very accomplished folks who have been lucky in life and love…even if it’s for the second or third time around.

There was the restaurateur of an historic Hollywood hangout with his new Russian girlfriend.  Everyone seemed to be vying for the couple’s attention and perhaps an invite to his restaurant.

A number of old school pals had flown down from Calvary, Canada to kibitz with the groom.  No one quite understood just how he had made all his money other than something about real estate and financing. But it didn’t seem to matter. He was a generous guy and everybody liked him.

Several women in the crowd stood out for their miles resurfaced and yet bodies to die for.  I don’t know if it was diet or exercise or a surgeon’s magic touch. But I’m betting on the latter.

Splashed among the crowd were several jackets and pants that offered a rich kaleidoscope of color.  The women were decked out pretty well too. There were diamonds and jewelry galore; each gender vying for the most weight allowed. It was like a glam set for the well traveled.

Despite their Botox and billions, they were a fun group to talk to…as long as you didn’t take yourself too seriously.  This really wasn’t our kind of crowd. It was like slumming…only moving upstream.

There were few assumptions and even fewer expectations among these folks.  Many of them have been there before and traveled a sometimes rocky road to their current success. It was fun to exchange travel notes, hear about their latest acquisition or toys and, of course, the weather back home. The crowd was warm and friendly. Everybody found someone to talk to…even if some of the conversations just skimmed the surface of pleasantries. 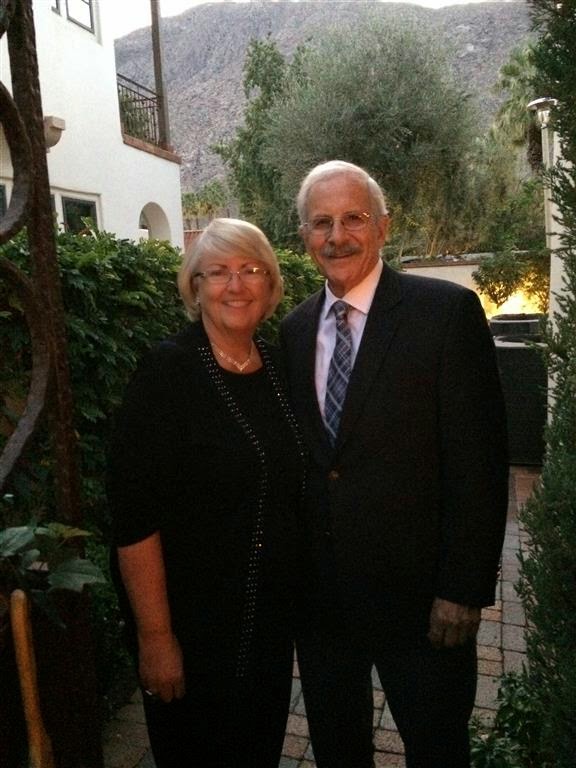 I guess it just goes to show that everybody needs somebody even at our advanced age.  Love comes in many different forms and flavors. Who am I to judge what attracts one person to another?

We toasted the bride and groom and wished them the very best.  I think many of the folks there secretly hoped that if they were ever alone at this age they would also find the joy and excitement of love once again.

It might be a lot to hope for.  Nevertheless, in the warm glow of that winter moonlight anything seemed possible.

Besides, the evening was rich fodder for an old storyteller like me.
Posted by Author Denis J. LaComb at 9:00 AM