I’ve been doing the Wabasha shuffle for 40 plus years now. It started out when I was captivated by this brilliant blond from work with a worldly view of life and as well as a vivacious personality. She had been raised on a farm down south and I thought it would be interesting to visit that foreign environment.

Gradually the Wabasha shuffle matured into weekend visits to her parents farm, then their home in town and finally now to the nursing home where her father is residing with his Alzheimers disease. Her mother still lives in town and pretends she’s on her own. Yet it’s only because of weekly visits by her children and daily visits by town folk that she is able to live out her illusion of independence.

A farm in the family wasn’t what I thought it would be. When the kids were small, I had this idyllic vision of “Dick and Jane visit Grandpa’s Farm.” 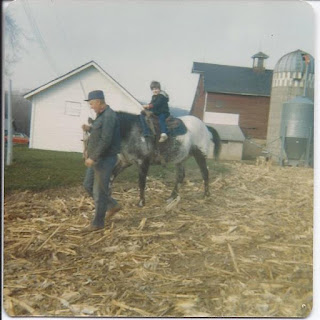 Unfortunately reality painted quite a different picture. Grandpa was still a working farmer and had no time for little kids running behind his tractor. So Melanie spent her time trying to catch feral farm cats (good luck with that) and Brian wandered through the barn, finding hiding places up in the lofts. 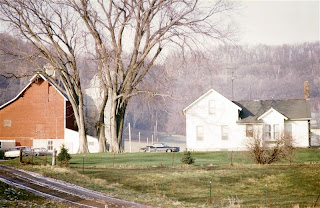 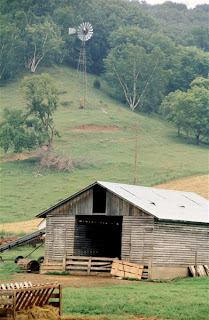 Nothing much has changed in Wabasha as is often the case in small town America. But like so many others before me, I’ve shifted and changed and morphed into different personalities as the sands of time carried me from one career to the next and one lifestyle to another.

To the town folk of Wabasha, I’ve always been ‘one of them city boys.’ I stopped trying to make inroads into their conversations a long time ago. Farmers regarded me with even more suspicion because of my city ties. Imagine their collective consternation when one of their own married a big city fella.

On our last visit to Wabasha, even my uniform of the day was wrong. I was wearing my trail running shoes, jeans I hadn’t worn in six months, a black t-shirt that read’ I love SF,’ my Galway jacket and a baseball cap with ‘writer’ inscribed on it. Little did I know that the real uniform of the day was boots and jeans, sweatshirts (Twins led the Vikings with the U.S. Army coming up a solid third) cammie jackets and baseball caps (again the Twins were leading the Vikings)

So often going back home means going back in time. But as Bob Dylan famously said there is ‘no direction home.’ Sadly, it can’t be done. The time capsule that is Wabasha, Minnesota is replicated across the country. Returning there to capture what once was is like trying to catch the wind (apologies to Donovan). It hasn’t changed but we have and there in lies the dilemma.

I have a friend who is flying in from the East Coast to attend her 50th high school reunion
in southwestern Minnesota. I think most people go to high school reunions to show off their lives in thinly veiled ways. It’s a game of “Look at who I married. Here is a picture of my handsome children and my beautiful grandchildren.” My friend became part of the East Coast academic/intellectia consortium of successful professionals. It’s probably a safe assumption that not all of her high school classmates have reached that same pinnacle of professional success. It can make for some awkward moments amid the social pleasantries and forced chatter of a reunion.

I’m guessing she will come to realize what I did at my own 50th reunion. After fifties years apart, I had little if anything in common with my classmates. While I carried my accouterments of success in my head, it never came up. Men are that way. In theCompany of Old Men pretty much describes that scene. It was fascinating, enlightening, a little bit sad and a little bit funny. It brought back a few fond memories but mostly it brought out a sly smile and wonderment that I had actually survived the trauma and confusion of those teen years.

Now after a second season in Palm Springs, returning to Minnesota to do the Wabasha shuffle is once again part of my summer agenda. And yet it is still pretty much the same soundtrack in terms of ‘been there before, don’t want to go back there again.’ But, of course, we must for the in-laws. It’s all part of shared marital responsibilities.

So I smile and make pleasant faces and try very hard to care about the price of grocery store staples and bloated government programs and all those issues paramount to small town America. Those foreign environments on the coast are never discussed and focus is always given to matters that really count like spring crops and fall harvests.  It’s still a foreign environment I rarely inhabit and must strive hard to make it work for me. I left all that behind when I moved away from home.

I’ll leave my Zen back in the desert for the summer and try to forge an understanding of small town America back here in Minnesota. I’m willing to step back in time but never enough to get lost there.
Posted by Author Denis J. LaComb at 1:00 PM