Ditching My Son in the Amazon 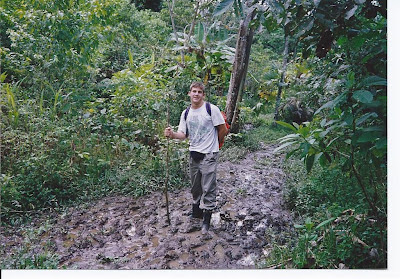 Most sixteen-year-old boys should be sent off to military school until they’ve reached eighteen and are a little more mature. Sixteen is that awkward age between childhood and manhood; a time when their hormones are bubbling up and yet their brain hasn’t quite grasped its significance in their young lives.

Now send a sixteen-year-old down to South America on his own (actually part of a school field trip) and the equation changes even more. Leave him there for two weeks before joining him and you’ve got a stranger on your hands. He’s having a blast until you become his reality check back to the real world. It can be a hard adjustment for both of you.

Two weeks alone with a wealthy and lax family in Quito, Ecuador was enough to turn my son Brian into Jack London, Jack Kerouac and Tom Clancy all wrapped up behind the disguise of a high school sophomore, varsity wrestler, chess captain, honor student and overall macho man.

By the time I got to Quito, Brian had morphed into a self-reliant, somewhat self-centered young man. Probably very typical of any sixteen-year-old boy ‘literally’ on his own for the first time in his life.

Loosely organized by one of the teachers, the trip was supposed to introduce these sophomores from several area high schools to the cultural and geographical wonders of Ecuador and the Amazon. Yeah, not so much. But they did have a lot of fun. 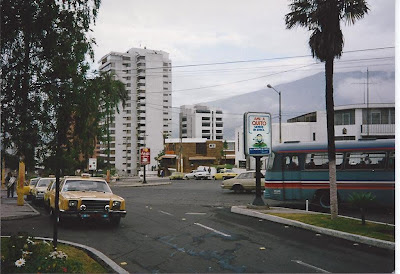 Quito, formally known as San Francisco de Quito, is the capital city of Ecuador. At an elevation of 9,350, it is the highest capital city in the world. It’s a strange mixture of new buildings and old. New wealth mingling with extreme poverty. All of this surrounded by the magnificent Andes Mountains.

Once I arrived in Quito with several other chaperones, we were dispersed to various hotels until our bus left for the Amazon several days later. Brian became my city tour guide and all-knowing advisor whether I wanted it or not.

I’m not about to wax poetic about both my two kids. They were normal, healthy, active kids who acted like normal teenagers…much to my chagrin at times. This trip provided the perfect storm for this young man on the loose…until Dad came into town.

Attitude is a strange thing. Adults can sometimes hide it but kids usually don’t do so well. Brian was feeling very independent and not sure how to express it. So he did what a lot of other kids would do in a similar situation at home; ignore their parents and play the independent role.

At first I was amused by his new persona but after a couple of days it got very old.

By the time we got to some frontier town bordering the Amazon rain basin, Brian had shunned entirely me for his buddies and hanging out with them. He ignored me on the bus. He did all the typical, normal things most self-centered, self-absorbed young men do, especially in the company of young, amorous girls on the hunt.

At that point in the trip, I was ready to swap my little munchkin to some headhunter for three chickens and a goat. But frankly, what other parent hasn’t had to deal with an incident or two when their good kid was just acting like a little shit? No difference here.

An adjustment was needed. So I convened a ‘Come to Jesus’ meeting. The three of us sat down and discussed his attitude and lack of sensitivity. After all three of us had our say, Brian got his act together and it was never an issue after that. 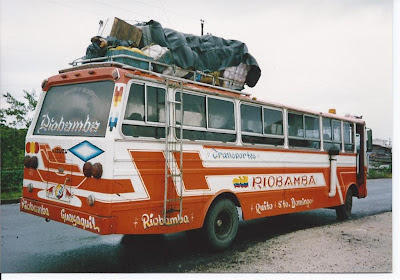 Once we were out of Quito our transportation was quickly reduced to using the local long-range bus system. Built for stamina and very rough roads, these transportation dinosaurs could do the distance. But creature comforts were left back at the station. The buses were built for the locals, which meant that if you were over five feet tall, your head would bounce up against the roof every time the bus hit a pothole or rut in the road. It happened a lot!

The seats weren’t much better. They may have worked for high schoolers but not grown adults. Stationary crunches became the norm once we found our seats. We were cramped and close together. Some of the boys weren’t complaining, especially if they landed next to a pretty girl. As an adult, I sucked in my gut and put on my happy face. There was no room for our luggage inside so it all went on top of the bus. If it rained, everything got wet. Our luggage got wet…a lot. 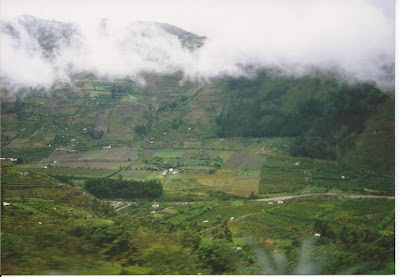 Traveling down to the Amazon rain basin from mountainous Quito entailed harrowing bus rides on dirt roads that simultaneously hugged mountainous cliffs on one side of the road and sheer drop-offs on the other. Not for the faint of heart or those with altitude problems. Fortunately our attitude issues were long since forgotten and Brian and I spent a fair amount of time, hanging our heads out the windows for the view. 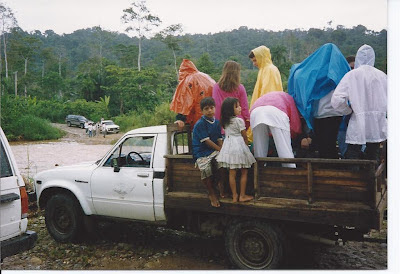 River crossings were always interesting, especially since this was the rainy season. If the bus driver wasn’t sure about the depth of the river crossing, we’d hop a pickup truck along with the locals and try to cross that way. We were like the proverbial canary in the mineshaft. If we made it across, the bus should be able to make it too. 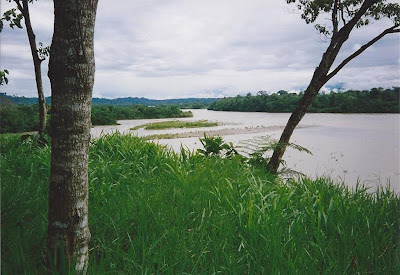 The Amazon River, according to many accounts, was named by Spanish explorer Fransisco de Orellana in 1541. The name was in honor of the female warriors he encountered on his voyage through the territory previously called Maranon. The Amazon rain forest is the drainage basin for the Amazon River and its 15,000 tributaries and covers 2,722,000 square miles. The river itself is 4,195 miles long. We got just a small taste of river life. 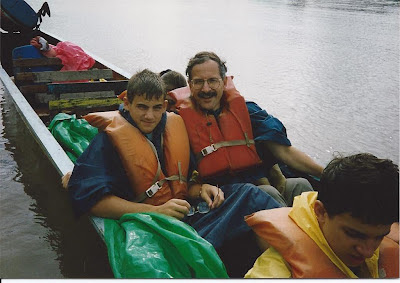 River transportation in that part of the Amazon consists of mainly dugout canoes. Enormous tree trunks were hollowed out and a motor placed in back. Since it was the wet season, our pilot was always on the lookout for washed out tree trunks floating in the river. A collision with one of those battering rams could have easily turned our dugout over on its side and put bodies into the water.

The other word of caution was for us to watch out for snakes hanging from low-lying tree branches or snakes in the water. And, of course, the proverbial crocodiles, which loved to shadow our dugout canoe hoping to find a hand or two dragging alongside in the water. 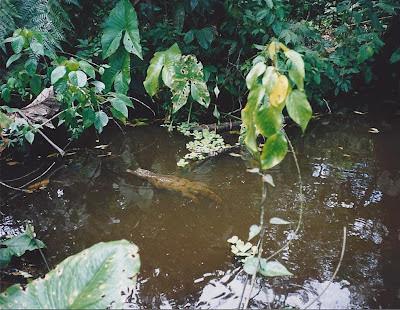 Sleeping accommodations ranged from sleeping platforms in the middle of the jungle (Fortunately there were age limitations because I know where my son would have been) to sparse cabins. The only rule was to check your bedding every night for spiders, frogs and snakes. Then the next morning, check your clothes, boots, etc. before you put them on 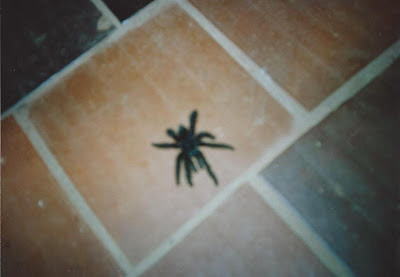 The climate was warm and humid in the river basin, with an average temperature of 79 degrees and an average yearly rainfall of over 80 inches. In other words, it was hot and humid and nothing nor anyone ever dried out there. Wet, damp or moldy was the order of the day. Every day. 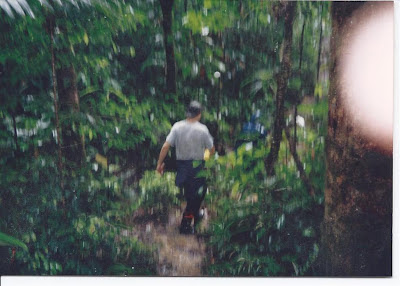 Brian and I agreed that the most memorable experience of the entire trip was our vision quest in a the pouring rainstorm. Each of us, student and adult alike, was marched into the jungle and then left alone (totally separated from one another) for a period of an hour or longer with only the sounds and smells and humidity of the jungle to assault your senses. It just so happened that our incubation period occurred during a very heavy rainstorm. I mean sheets of rain and visibility of about ten feet, if that, for hours on end.

The idea was to experience the Amazon rain forest in its entirety without the distractions of other people and outside influences. There was no way any one of us could have found our way out of there. We had to trust that our guide would come back and find us and lead us back to camp. It was awesome. 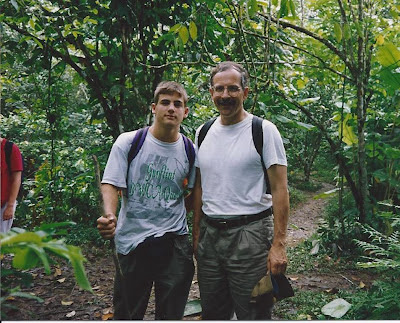 Brian and I both thought we’d died and gone to heaven. Hard to explain if you haven’t been there but it was a very thought-provoking experience. 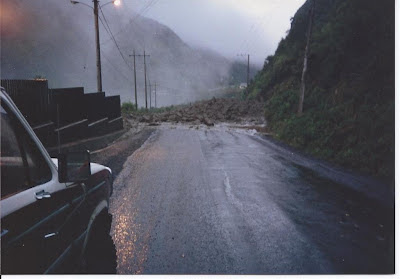 The theme of torrential downpours continued with what could have been a very serious bus accident not long afterwards. Our bus was traversing some mountainous pass, climbing its way back out of the river basin toward Quito. In the early morning hours, our bus missed a small avalanche by mere seconds. Rocks and boulders plunged down the mountainside and crashed into a nearby stream. A torrent of water came roaring past our bus, rocking it on its springs. If we’d been broad sided by that mudflow of rock and debris, I’m sure our bus could have been swept off the road and into that stream. Kind of like, Ice Road Truckers. 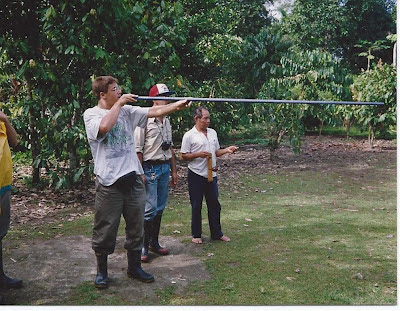 Brian tried out a blowgun. He got pretty good at it. Fortunately you can’t buy a blowgun at Fleet Farm or Walmart. 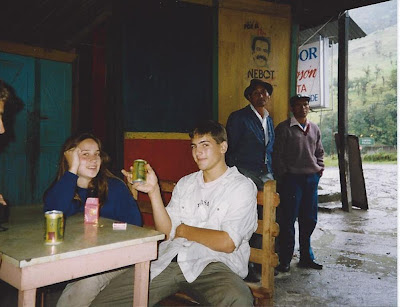 Not to be forgotten but certainly not bragged about was my watching several amorous seniors come on to Brian as I was sitting at the same table. My young bon vivant laughed at my concerns and lack of understanding of the high school mating ritual.

Apparently they start even earlier in South America. And Brian, assimilating all things native, thought it only appropriate that he too initiate or at least assume their native ways.
Father thought differently and a compromise was reached. I kept my eye on him and he kept his eye on me.

Third place in memorable experiences would have to be the pool game Brian and I played back in Quito. While Snow White wasn’t there, we did play against three Israelis who were traveling through South America, a couple of Mexican nationals and several locals. A group of young girls from the neighborhood were our audience. And again I was struck by the irony of my sixteen-year-old son playing pool in Quito, Ecuador in the back room of a Pizza Hut with such an international group of players. Naturally, he thought it was no big deal. 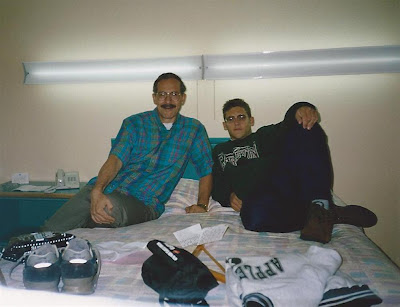 Our trip to the Amazon was more than just a high school field trip. Instead it became our vision quest, a journey of self-discovery for both Brian and myself. For Brian, it was his first taste of other cultures, which only wetted his appetite for greater adventures ahead and inspired him to travel around the world while still in college. For myself, it was a continuation of my desire to explore options and opportunities that might expand my own creative horizon.

So while some other fathers might regale their buddies with their father-son bonding stories of camping trips or baseball games, I came to admire and grow very proud of my son in the dangerous backwaters and jungles of the Amazon River basin.