Snow White and the Seven Seekers

There was nothing to keep me back in Minnesota. I had the world to explore. So a magazine ad that promised work in Europe was all it took for me to pack my bags and sprout wings. One week after graduation I was on an Icelandic Air prop to Paris. The
adventure had begun.

When I got to Belgium, I found the job center and marched into their sparse quarters. One hundred and seventy five dollars had guaranteed me all the thrills of living abroad. The promise was a job working in a hotel in Amsterdam. (sex, drugs, and rock & roll). But reality only offered a job in a laundry in Danmark (soap suds, hot towels, and boredom instead)

Being the world traveler that I wasn’t, I asked “Where is Denmark?”

They said to “just head north until you run into the Baltic Sea, cross it and you’re in Danmark. Your job is in a small town laundry eight train stops out of central station, Copenhagen.”

Undismayed, I took their job offer and a train ticket for ports north.

My first night was spent in some unnamed hostel in central Brussels wondering what I had gotten myself into. My ubiquitous bravado had disappeared with the smelly sheets and strangers snoring in my ears. My fellow travelers in that dorm room were all the usual suspects; teens and twenty-something’s. Our common bond was a lust for travel and taste for adventure. But no one told me about communal living.

The next day I met Snow White.

Around the breakfast table that morning were three wandering Jews from Israel (their description, not mine), a couple of Australians (no surprise there), a ruddy-faced kid from Scotland and myself. And the girl.

I don’t recall a lot of details about her. She was blond, I think. She was beautiful, that I remember. And she had on this white turtleneck sweater that she filled out quite well. Recollections of our collective conversation that morning became a blur. But I do remember being quite taken back by her casual comment that she was a puppeteer, she was from Canada and she was never going back home again. She certainly made an impact on me, not so much for her beautiful facial features or swelling sweater, but rather her confidence of purpose.

Snow White had left someplace Canada and wasn’t going back home again. She was going to travel Europe and find work as a puppeteer (I never knew there was such a job). And yet even as she talked about her vague plans, I couldn’t help but believe that even if she didn’t find work as a wooden doll manipulator, she would find satisfaction in living abroad, and loving her dream. She was poised, confident, and ready to take on the world. I was just looking for Danmark.

My first and only roommate had arrived at the laundry only days before me. Animal was a chain-smoking college dropout who somehow managed to snag a basement apartment of some random house nearby. He offered me a corner cot and a burner on his hot plate. It was a tolerable living arrangement since he spent most of his off-work hours at a local bar and I could read in a smoke-free environment if only for a little while. He disappear-ed for parts unknown after a couple of weeks and I was left in that dumpy basement sans toilet, sink, and shower. 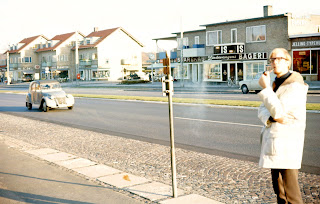 A genuinely nice person was Maria. She was a young married woman who worked alongside me at the laundry. She only spoke Danish and Spanish. I only spoke English and barely discernable Spanish. She became my link to all the gossip, trauma, and drama that was going among the laundry staff. Being forced to speak only in Spanish was a wonderful exercise for me in sign language, perfecting a broad smile, and a keen ear for Danish-Spanish-English dialect. We got along famously. 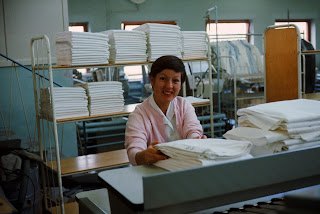 A more worldly companion was a guy from Canada. I can’t remember his name. His first words of advice were: “Always have a Canadian patch on your backpack and say you’re Canadian.” Back in ’67 the Vietnam War was in full swing and Europeans didn’t much like Americans. I took his advice and remained Canadian until I boarded my flight home months later.

I don’t remember a lot about him other than the fact that he was living with a Danish family in a huge house by the sea, he could use their car whenever he wanted, he worked at the family factory, and they had a daughter who liked him. A lot. Jealous, me? My eyes were green whenever we were together. 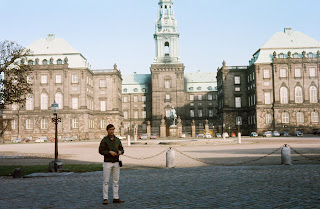 He and I took a train to Berlin one weekend and got off in East Berlin by accident. Luckily no one stopped us as I strolled down the boulevard taking pictures of military installations. 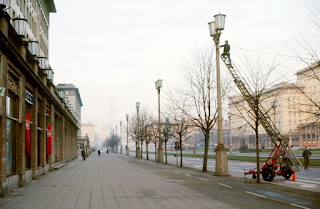 Another time we spent a weekend with two university women who lived on the coast. We rode around in their mopeds, went to their University classes, drank too much beer, and listened to the Bee Gees (an Australian group) singing about ‘Massachusetts’ over and over again. I remember being utterly amazed at the juxtaposition of our respective cultures, attitudes, and varied interests all melding together in harmony with that one song.

I was invited back for a weekend alone but declined. Probably for the best. I think she would have taken me ‘around the world’ and I had only gotten as far as Danmark thus far. Another metaphor.

Tina was another lost soul much like myself. She provided the intellectual stimulation that neither broken Danish nor a library card had been able to fill. At that point in my tenure in Europe, I had read every book in the English language section of the Copen-hagen branch library. Yet it wasn’t enough to dispel the growing loneliness I was feeling inside.

I can’t remember how I first meet Tina. I think she was a nanny or housekeeper in some neighboring village. She was originally from Tucson and how she ended up in a village outside of Copenhagen, I have no idea. I’d go over to her place at night and we’d end up talking half the night. Cheap wine or beer, whatever was around, fueled our rambling essays on life back in the states, the drama of family issues, and the simple joy of com-panionship between two strangers, each lost in their own issues, in some Scandinavian village half a world away from our own.

Tina eventually made it back to Tucson long after I had left Europe. We wrote to each other for a couple of months. Each of her letters was full of sadness and angst. I think after awhile it got to be too much for the both of us and we quit writing. I still have her letters. No idea why I kept them?

I do hope Tina found what she was looking for and some semblance of happiness in her life. She so deserved it. 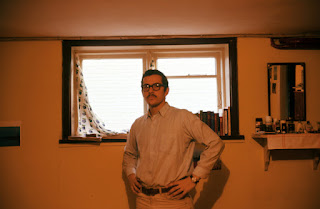 The laundry work was growing intolerable. Food was sketchy and I think I was getting malnourished. And my loneliness kept growing. One morning nature jump-kicked my indecision about staying or leaving. I stepped outside and found six inches of freshly fallen snow on the ground. Shocked at the harbinger of Minnesota trailing me all the way there, I asked a friend if it snowed a lot in Danmark. He laughed and I quit my job and stuck out my thumb. The south coast of France seemed appealing. Snow free, I was told, and bare breasts besides. 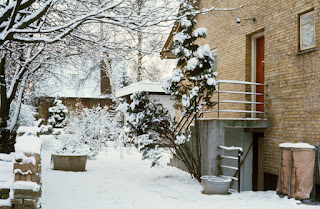 After I left Danmark and began hitchhiking South, I kept thinking about that hostel back in Brussels and all my wonderful memories of that place. Even hanging out at a gypsy camp outside of Paris didn’t quell my desire to get back there again to try to recapture those first initial tastes of wanderlust alongside Snow White.

I finally made it back to that hostel in Brussels and learned one of life’s most valuable lessons. You can never go back again. Foolishly, I had thought I could recapture some of those wonderful feelings I had the first time around. But the staff had moved on, a new collection of wanderers was different from my Jews and Australians and Scotsman. And, of course, she wasn’t there either. The love of my life for one day at the hostel and the source of so many midnight fantasies had vanished forever.

I realized then that you can’t go back and recapture something as vapid and nebulous as feelings and emotions emitted in one brief moment in your life. Those feelings are like
children of another time and place who have grown up, matured, and are now gone forever

But I’ll remember Snow White, if only in my imagination, and what it was like sitting across from her for that one brief morning in some forgotten hostel in faraway Belgium. She was my dream fantasy, a woman idealized and yet only attainable as an imaginary poster on my basement wall next to Farah.

But who knows, somewhere in the world, there could still be a very lucky puppet.
Posted by Author Denis J. LaComb at 11:29 AM

I wonder what the economics where then that a laundry in rural Denmark had to seek laborers from as far away as the US? I am enjoying your stories.

I found it fun to listen open a 2nd tab in my internet browser and play the song "Massachusetts" by the BeeGees while reading the post... having thought that I knew every BeeGees tune back and forth, it was a wonderful new experience both to hear the song for the first time AND be transported to a scene where it was heard for the first time so many years ago. Thanks Denis! Keep up the posts, I'm hooked. Here's a link to a YouTube video of the BeeGees playing "Massachusetts" http://www.youtube.com/watch?v=4XWYefe9EzI