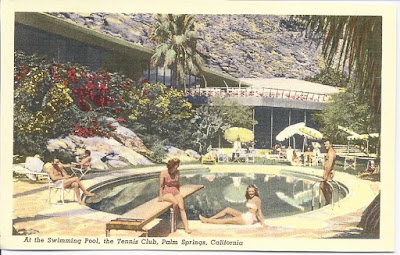 Mid-century modern design was hot in the Coachella Valley back in the Forties and Fifties. It was seen as a cost efficient, unique style that lent itself well to the harsh desert environment. These mostly second homes were modern and attractive for weekend owners and visitors alike. 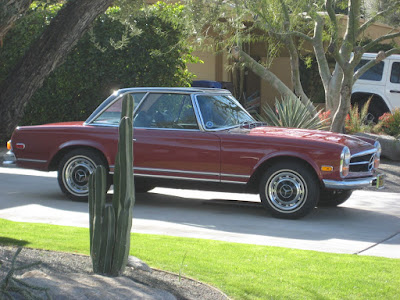 Beginning in the mid-40s, architects originated a design movement specific to the greater Palm Springs area. It became known as Desert Modern or McM (Mid-Century Modern.) Their buildings featured groundbreaking techniques such as post-and-beam supports, floor-to-ceiling glass walls and a wide array of colors to match the surrounding mountains and desert. 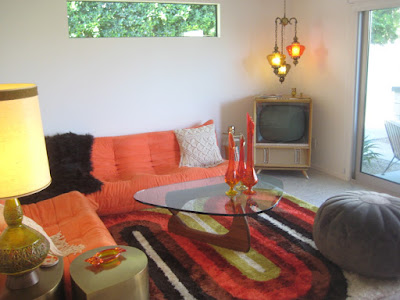 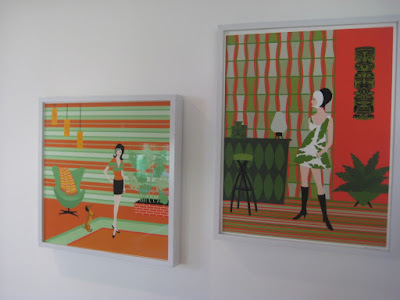 ‘Palm Springs Modern’ became the catch phrase for anything and everything young and hip among the trend setters from L.A. and San Francisco. Hollywood embraced this self-serving, indulgent, narcissistic approach to self-realization. All was well with the world until reality came rumbling into the picture in the form of global tourism.

The burgeoning global tourism industry whisked annual vacationers, including many Hollywood stars, out of the country on jetliners bound for Europe and Asia. This mass deflection curtailed cross-country road trips and put resort destinations like Palm Springs and the Hawaiian Islands on the back burner.

By the mid-seventies, twenty years of population and construction booms had left Palm Springs exhausted and depleted. Proposition 13 did little to help the city’s finances. A building moratorium was declared and consequently the 70s became a period of no growth for Palm Springs. 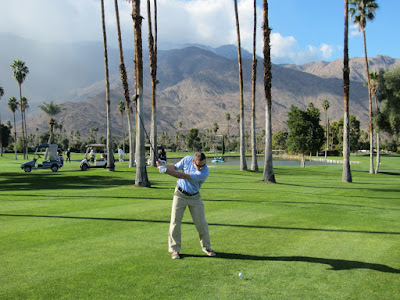 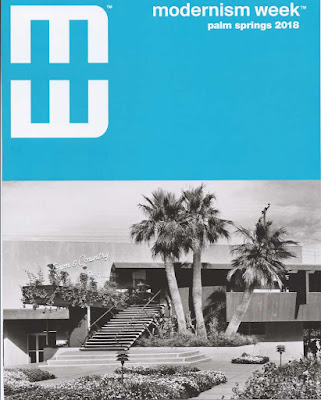 Palm Springs lay dormant and undisturbed for another twenty years until the mid-90s when interest in mid-century modern architecture and designed started to swell once again. The 1950s were reevaluated as a period that produced an explosion of ideas and a purity of design that has not been matched since. 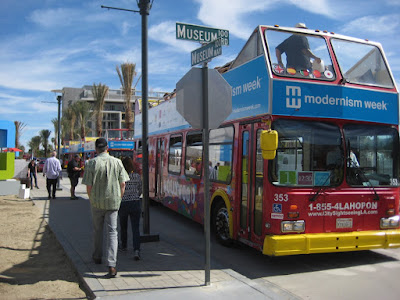 Never one to miss an opportunity to blow its own horn, Palm Springs jumped on the McM bandwagon about ten years ago and has never looked back. Modernism Week became a signature event held every February in Palm Springs. 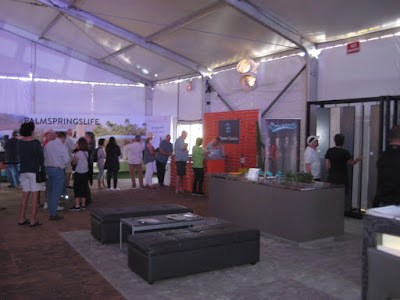 This year, it attracted over 150,000 modern architecture lovers from all over the country and the world. There were 350 plus events to showcase and highlight the very best of modernism designs and trends. There were art fairs, a modernism yard sale, vintage car show, lectures and films on historical Palm Springs architecture, as well as many events at the convention center. One of the highlights of the Week are the neighborhood home tours. Our Indian Canyon neighborhood was included as a part of this year’s home tours. 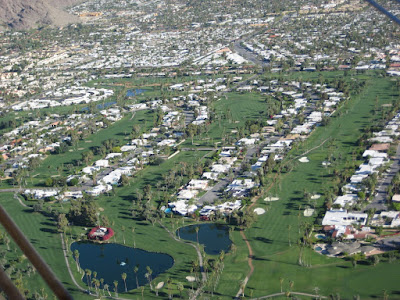 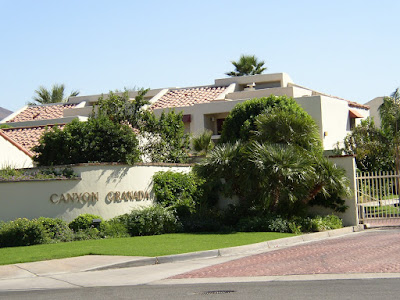 The historic Indian Canyons Neighborhood, originally known as the Canyon Country Club Estates, was built in south Palm Springs in the early 1960s. Developers created a variety of high-end homes and condominiums with famous architects like William Krisel, Stan Sackley and Charles DuBois among others. The homes stark lines and heavy furniture spoke of status and class among the Jewish upper crust of the coastal cities; their intended demographic. 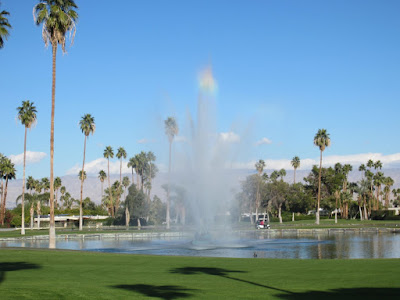 The North Course was built in conjunction with a 1.5 million dollar stunning midcentury modern clubhouse designed by Donald Wexler and Richard Harrison. To make the opening of Canyon Country Club spectacular, Walt Disney, who owned several luxury homes built along the second fairway, donated a fountain that shot water into the sky from a floating lily pad.

In years past, Sharon and I had volunteered to be docents for these home tours of our neighbor-hood. 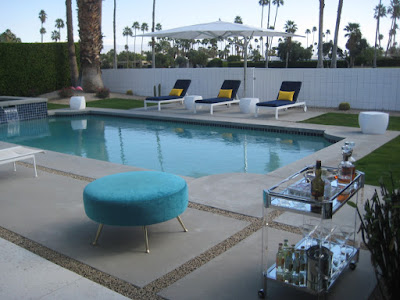 The home where we were docents, at 2,800 square feet, was built in 1966 by Harry Kelso. Its current owners purchased the home in 2017 and spent 16 months gutting the home and doing a complete remodel. 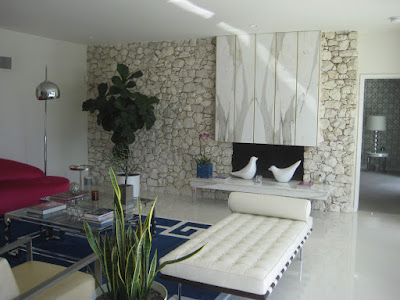 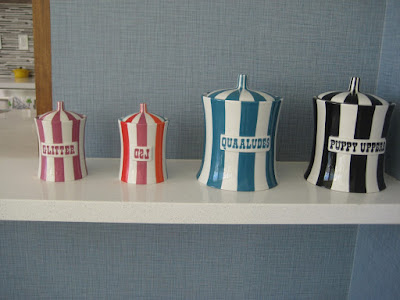 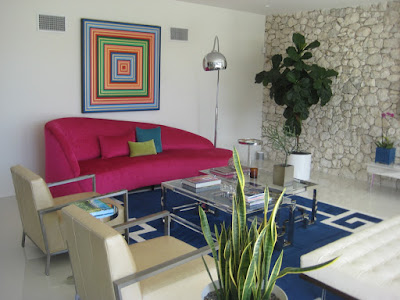 The home features a modern kitchen and all new windows and doors, including tall custom sliders which hide into pocket walls in the living room. It’s a smart home and owners can control the lighting, shades, music, HVAC, security, etc. remotely from almost anywhere. 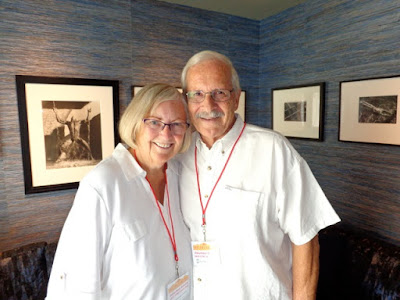 It was a great opportunity to meet more of our neighbors and peek in on the lives of the design-conscious, artsy-types who created these one-of-a-kind homes in our South Palm Springs neighborhood. Those homes are as much a statement as anything else. They speak of great taste in design, opulence, class, and status. 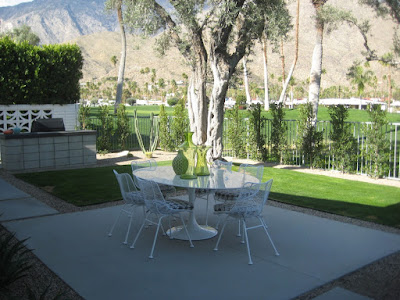 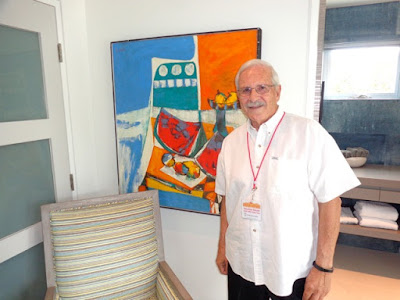 Fortunately, my taste doesn’t lean toward mid-century modern architecture or eclectic furnishings. I’m too old-fashioned for a $10,000 sofa designed by some ancient Italian or a chair made out of Plexiglas. Give me a comfortable chair, a cup of coffee and mountains as my backdrop. That’s all I need.